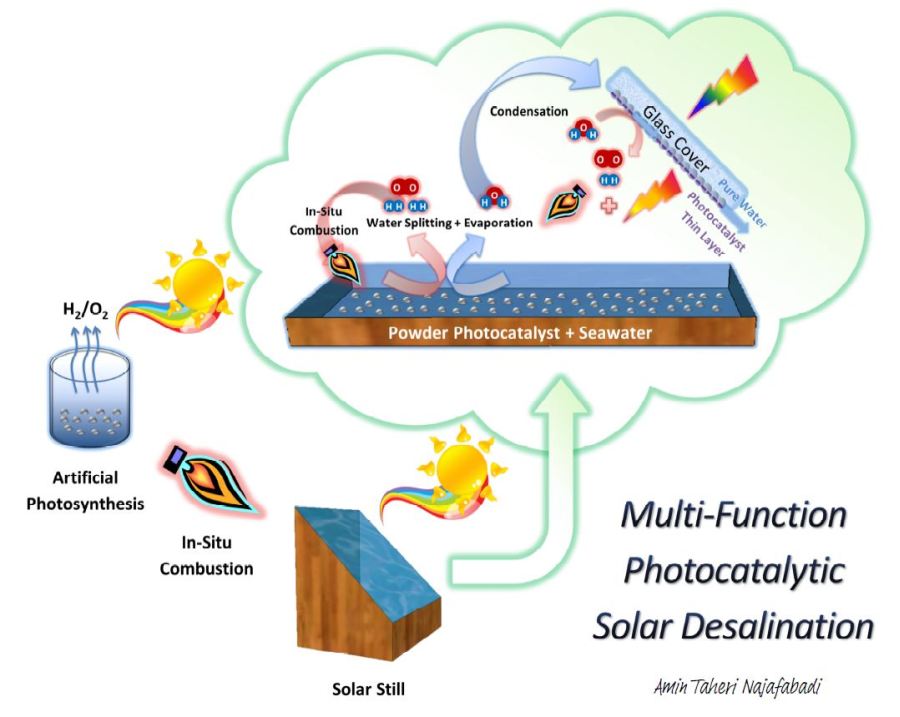 Producing 1,000 m3 of fresh water per day requires approximately 10,000 tons of oil per year (equivalent to 35,000 tons annual carbon dioxide emissions). Apart from the obvious environmental concerns, this is something that few of the water-strapped areas of the world can afford. Besides, due to the energy crisis, search for sustainable energy alternatives is essential to supply the required energy of the desalination process. Over the years, solar energy has been used to purify water and numerous solar desalination devices are developed based on the principle of water vaporization, thus water vapor separation from dissolved matter, which is condensed afterwards as pure water.

Solar stills with the direct utilization of solar energy are the most suitable solar desalination units for use as low-capacity and self-reliant water supply systems; where basin-types are the simplest and perhaps the least expensive solar stills. However, they suffer from low productivity rates, low thermal efficiencies, considerable required land area and related maintenance issues associated with algae and scaling on the black bottom surface. In a passive solar still, the incident solar radiation on its cover is the only energy input to the system playing the most defining role in the still’s productivity.

From the energy point of view, water splitting under solar irradiation for green hydrogen production (i.e. artificial photosynthesis) using semiconductors capable of light absorption (so-called photocatalysts) is currently one of the hot topics with so many breakthroughs in the past decade. Combining this field with solar still devices eliminates the main disadvantages of such direct desalination techniques. Hydrogen combustion brings a significant supplemental sustainable heat source to that of direct input from solar energy, synergically improving desalination efficiency with employ of almost all near-infrared, visible, and ultraviolet (UV) regions of solar irradiation. Major maintenance concerns due to the sludge formation will also be resolved with the decontaminative nature of the photocatalyst powders. In addition, the activity of such materials will increase with some of the salts present in seawater such as sodium sulfate.

Taking advantage from extra heat of hydrogen oxidation, we can potentially increase the experimental output of such systems from 4-5 lit/m2.day by 400% or higher! There are two possible positions for photocatalyst implantation; one is the UV-active ultrathin layer deposition on the inner side of glass cover where condensation happens, certainly thin enough to selectively absorb the UV portion of the light while allowing the rest to pass through; the other is floating powders in the basin seawater where visible-light-activated photocatalysts are more desired for both hydrogen production and sludge removal.

Addressing long-standing human challenges requires state-of-the-art combinations of science and technology. In this regard, two major advancements are crucial; firstly, an impeccable linkage of hydrogen production-combustion configuration with solar heat source to achieve the expected synergic input power; secondly, synthesizing modern photocatalysts with higher efficiencies under visible light using nonprecious materials. This can be ultimately viewed as a promising end-use of green hydrogen produced via artificial photosynthesis with zero storage and transportation costs to provide potable water in remote areas.