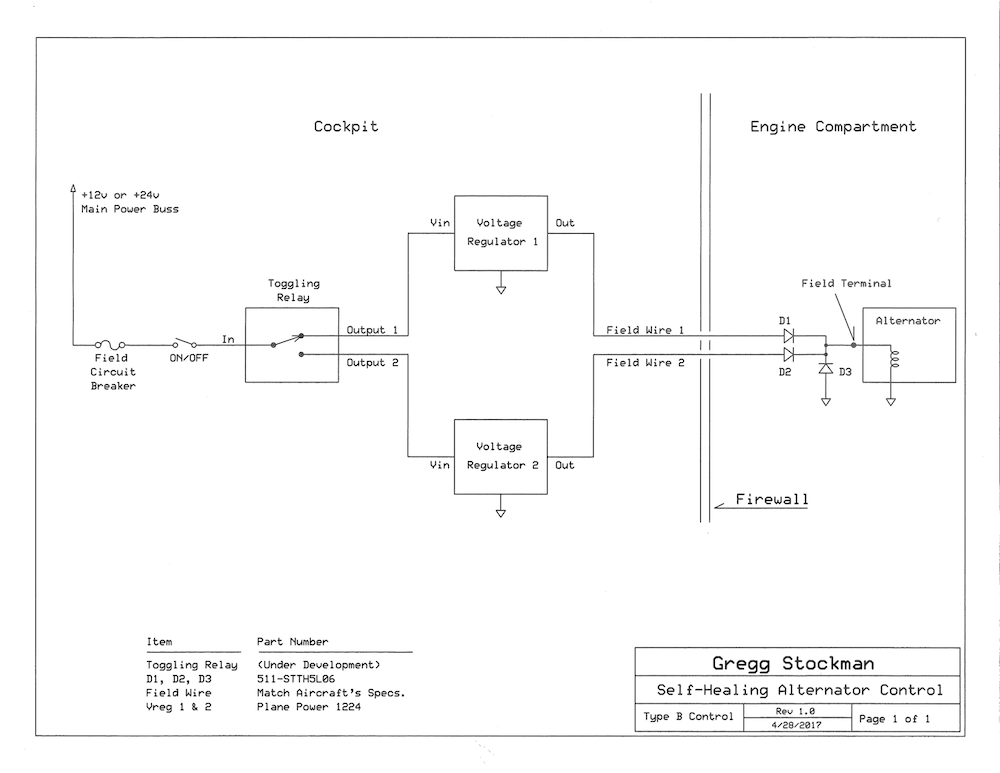 Aircraft today are loaded with electronics. So having electrical power available is critical for safe flight. The sole device for producing this power is the aircraft’s alternator. Unfortunately, the present state-of-the-art for controlling it is not totally reliable. So a unique method has been developed to improve this.

The Self-Healing Alternator Control has four stages located between the control switch and the alternator itself: (see schematic)

The control process begins when the pilot closes a switch to bring the alternator online. Voltage then arrives at the toggling relay’s input. This voltage is then passed through to either Output 1, or Output 2. Note, the next time voltage is applied the relay automatically toggles to energize the other output. This action allows both regulators to take turns working.

Next, voltage is applied to one of the two regulators. This device determines how much power the aircraft needs and outputs a control signal (PWM).

The control signal travels from the cockpit, through the aircraft’s firewall, and arrives near the back of the alternator. It does this using one of two field wires provided.

Lastly the control signal travels through a diode (D1 or D2). This energizes the alternator’s field winding, enabling it to produce the amount of power needed. Also located at the back of the alternator is diode D3. It arrests counter electromotive forces that develop during shutdowns.

Alternator control circuits have several failure modes. They are:

Regardless of the failure mode, the control system is typically shut down and restarted by the pilot. When this reboot occurs, the Self-Healing Alternator Control automatically toggles to energize the other regulator, and utilize the other field wire. This toggling action, along with some blocking action by a diode (D1 or D2), bypasses any malfunctioning components. The result is that a control signal is always restored to the alternator. This allows it to resume producing the amount of power needed.

Additional benefits can be obtained by adding a voltage monitoring circuit to the toggling relay, which would detect malfunctions early. Then the relay could self toggle (reboot) automatically. This feature would be especially useful when a pilot is not on board (drones). A control system, with monitoring technology, would be described as being a Self-Monitoring, Self-Healing, Alternator Control.

The control techniques described above could be used on single engine aircraft, regardless if it is diesel, piston, or turbine powered. New aircraft could be equipped at the factory, and legacy aircraft could be retrofitted during maintenance.

Most of the components needed are off the shelf. One exception is the toggling relay. This item is under development and can be produced using traditional manufacturing methods.