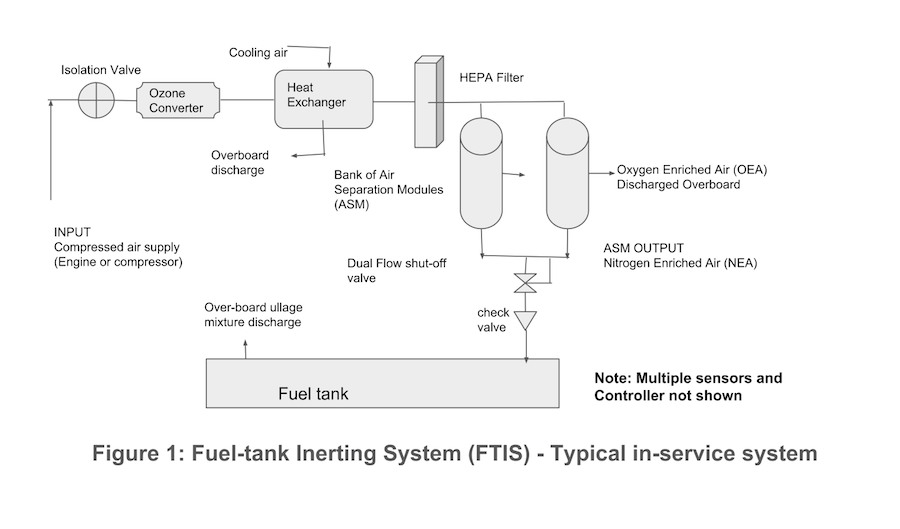 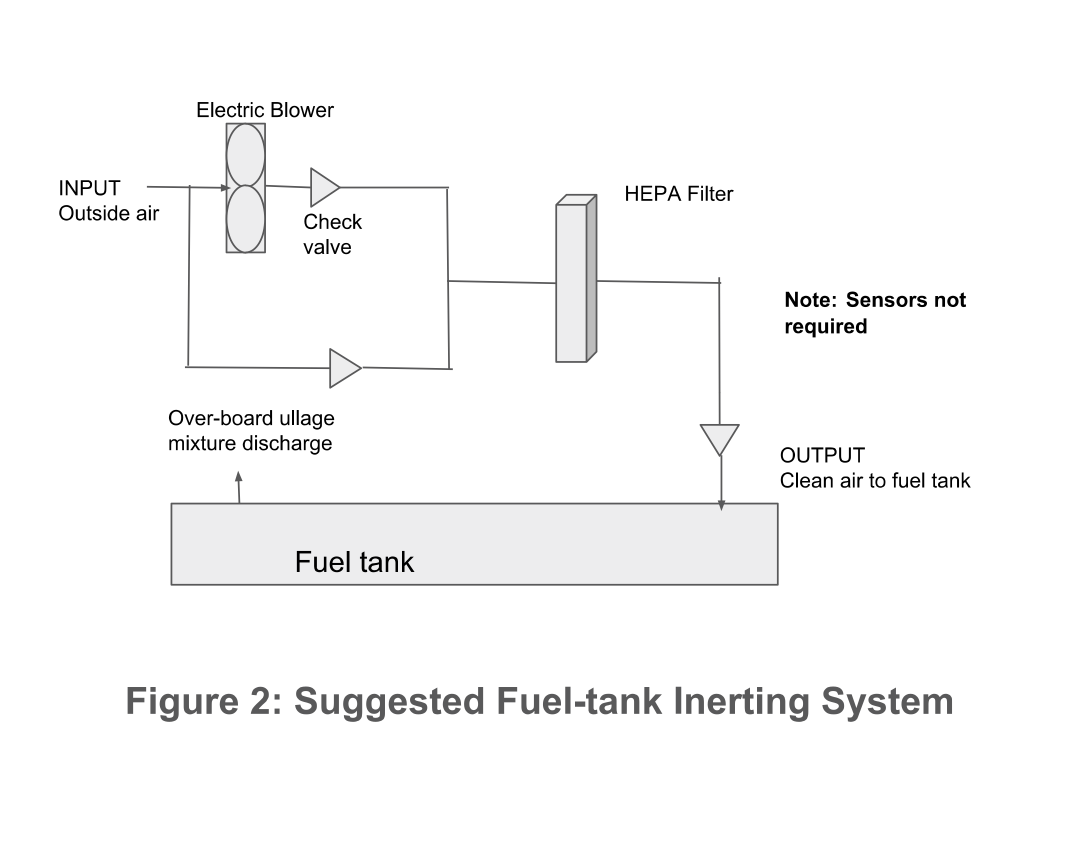 Since 1990, three aircraft, manufactured in USA, have exploded due to combustion in the fuel-tank. In 1996, Trans World Airways (TWA) Flight 800 explosion caused 230 deaths. National Transport Safety Board (NTSB) listed “Explosive Mixture in Fuel Tanks in Transport Category Aircrafts” as Item 1 to its Most Wanted Transportation Safety list in 1997. The Federal Aviation Administration (FAA) amended its regulation 14CFR25.981 on July 21, 2008. The regulations do not mandate the use of any particular system type. The industry has selected fuel tank nitrogen inerting system (FTIS) to prevent explosions. Typical in-service system is shown in Figure 1.

FTIS uses compressed air for its operation. Ozone in the air is dissociated. The air is cooled, filtered and supplied to a bank of air separation modules (ASM). The ASMs generate Oxygen Enriched Air (OEA) and Nitrogen Enriched Air (NEA). OEA is dumped overboard and NEA supplied to the fuel tank wherein it mixes with the ullage contents. NEA reduces ullage oxygen concentration. FAA considers the fuel-tank to be inert when the ullage oxygen concentration is below 12%. Department of Defence requires lower concentrations for an inert fuel-tank. NEA supplied to the fuel-tank forces out equivalent volume of fuel vapor laden ullage mixture from the fuel-tank. The system uses temperature, pressure, and oxygen sensors (not shown) for system operation.

My idea, based on the axiom “lean” fuel/air mixtures do not ignite, is shown in Figure 2. It prevents the ullage from becoming flammable by preventing the fuel/air ratio (FAR) approaching the flammable threshold. Commercial and military aviation use use fuel of high lower flammability limit temperature (JET-A1, 100F at sea-level); low volatility (vapor pressure significantly lower than of water) and FARs greater than 0.03 for combustion.

Refer to Figure 2. An electric blower ventilates the fuel-tank on ground and at low aircraft speeds using filtered outside ambient air. On ground, the blower operates on external or ship’s power. This allows fuel tank inerting when the airplane engines or on-board Auxiliary Power Unit (APU) is not operating.. At aircraft speed greater than a selected threshold the blower shuts off and ram pressure supplies the air and ventilates the fuel-tank. Ullage mixture continuously exhausts out of the tank at the supplied air rate. This maintains the fuel-tank ullage FAR below flammability threshold and the ullage non-reactive to ignition sources.

The potential benefits of my idea over in-service system are enhanced reliability and safety, and reduced maintenance and spares cost as it has fewer components Other benefits are lower initial cost, weight, and carbon footprint (compressed air is a highly expensive commodity) Savings in cost and weight of over 75% on a commercial airplane are feasible. On KC-46 (Tanker),and other military aircraft the savings will be substantially greater in life cycle costs..

The product can be manufactured by an aerospace equipment supplier (e.g., Honeywell). The system uses state-of-the-art technology and components that are commonly used in aviation.