Inverted Magnetron as an RF Source for EM Drive 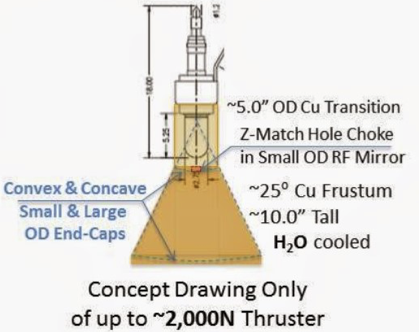 The proposed concept of a RF pumping source embedded into a resonant RF cavity of the resonant cavity thruster (EM Drive), consisting of a cylindrical tube and a frustum coupled together, assumes to use the cylindrical copper tube coupled with the smaller-diameter side of the main copper frustum as a body (cathode) of an inverted coaxial magnetron.

The proposed concept assumes that the inner surface of the copper tube will be covered by an electron emitting substance, such as carbon nanotubes (CNT) for instance, and used as a cathode of an inverted magnetron, while the multi-cavity anode of the inverted magnetron will be centered inside the copper cylinder.

The main challenge of the proposed design is that the whole volume inside the resonant cavity thruster should be kept at a good vacuum condition, which, of course, would not be a big problem in an outer free-space environment.