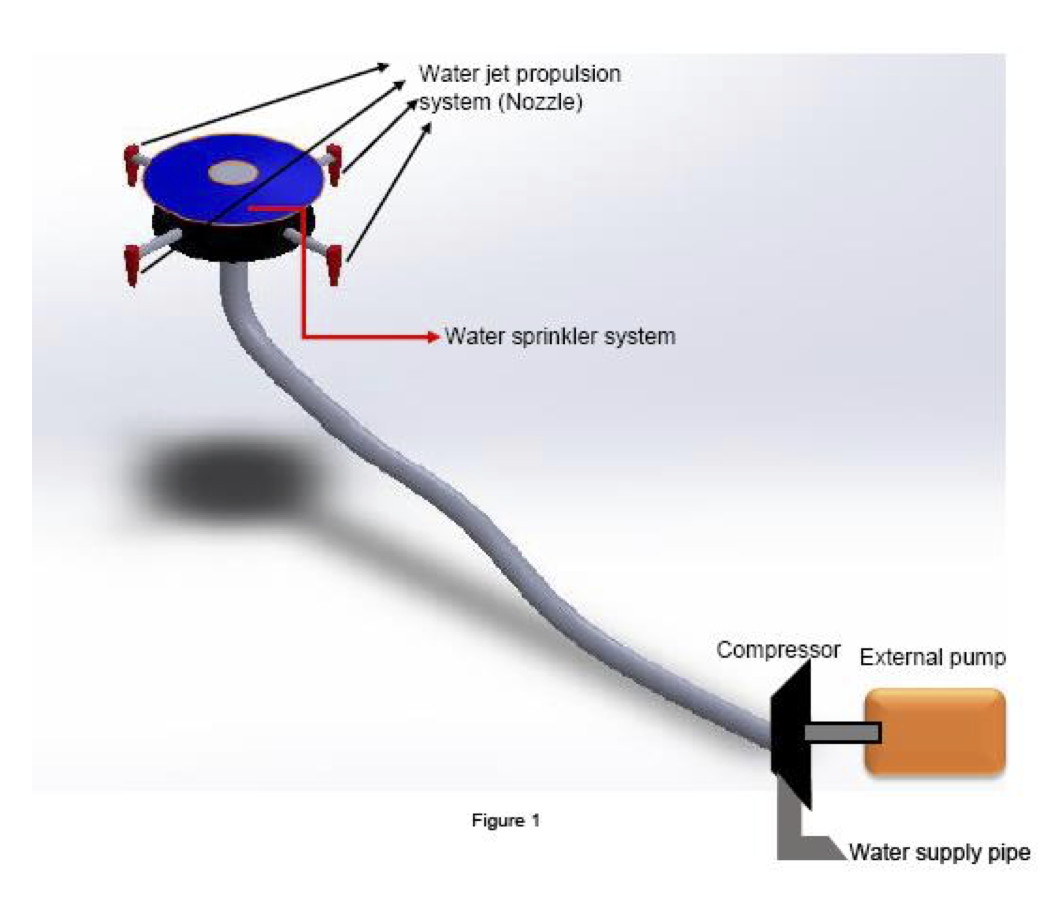 Education, military, agriculture among other fields are using drones to benefit the proficiency. Drones are used in almost all the operations as well as the industries nowadays because of their reliability, cost effectiveness and multifunctionality.

Jet packs are similar to drones because they are propelled into the air as a result of escaping gases/fluids. The hydro jet pack has been successfully designed and developed and used in various applications. Water Jet Fire Extinguisher system uses water jet as the propulsion system as well as a fire extinguishing agent.

Water Jet Fire Extinguisher is a type of hybrid drone that combines a quadcopter system with a water jet pack system. The drone system uses the power of a pump or fire hydrant to supply high pressurized water to lift the body and the hose into the air. The water jet which generates the lift also extinguishes the fire in addition to the sprinkler on the top.

In this project, the water jet which generates the thrust force to lift the body also extinguishes the fire. A Water Jet Fire Extinguisher system is designed and built using the principle of quadcopter and the conservation of energy for fluids (Bernoulli’s and continuity equation).

Water is an incompressible fluid and the precise force can be generated by varying pressure and velocity. The flow rate on each arm is controlled to stabilize the system. The sprinkler on top of the drone can be rotated and extinguishes fire as it sprays water over the designated area. Currently, the water powered jet pack and jet boards is what powers the drone to fly.

The biggest challenge in this prototype model is the increase in water weight with the increase in length of the hose as it goes a higher or longer distance. There is a limitation on the length of the hose able to be used and we are hoping to innovate a new alternative method to address that problem. For instance, in the case of battling a skyscraper that is on fire, a stand with a flexible holder attached to the pole is provided, which can hold the hose as it raises into the air. Another option is to design a new type of TELESCOPIC HOSE so the weight (smaller section of the hose) is reduced closer to the drone body.