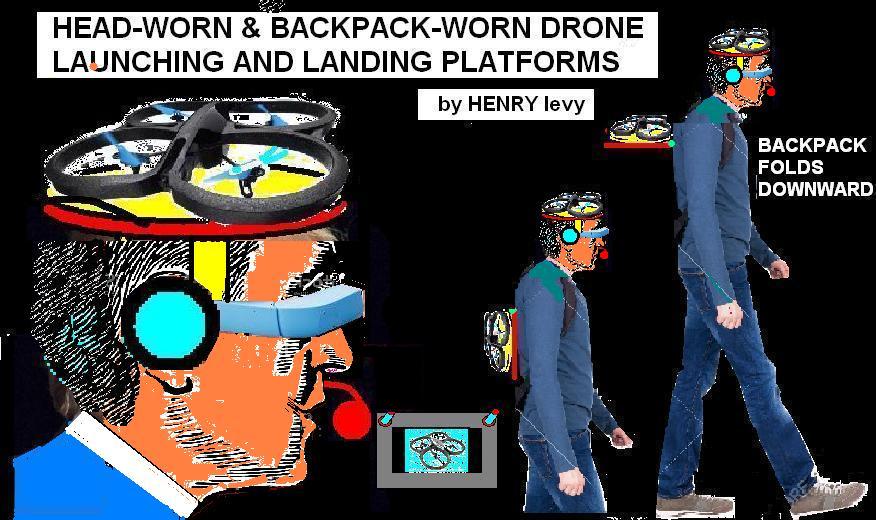 The headworn drone instant launching and landing platform has a unique remotely piloted drone sitting upon a launching / landing platform mounted on top of a wearers head. And similarly, a second unique drone is mounted on an instant launch backpack. If one drone is lost there’s another. The drones are mechanically and magnetically attrached to the platforms with quick releases. The headset holding the platform has a self contained monocular (or stereoscopic) display built within the headset below the drone platform. Hand-held battery operated radio controllers of the 2 drones each contain an optional back illuminated (LCD) display. The controllers can send control signals which turn on the propellers of the drones to selectively launch either drone upwards from their launching platforms. The hand-held controllers control the speed and direction of each drone as well as, controlling a camera on the drone. The drone camera can be panned, zoomed, and tilted up and down. The image from the infrared or visable light cameras can selectively be viewed through the head-worn display or on the controller display. Each controller controls one drone real time or each can be preprogrammed for missions. A return button on each controller returns its drone to its originating launching / landing platform on the head or backpack. The drones are each guided by homing beacons (beneath the landing platforms), GPS, and also guided by image recognition software recognizing its path memory and the top of each platform when each drone is within image recognition range of the landing platforms. Flight path memory and flight imagery memory is stored in the drones or in the hand held controllers. The drones will return to and land on top of their landing platform automatically. Standard gyroscopic sensors and inertial accelerometers stabilize the craft during flight. The drones are rapidly deployable, yet held firmly affixed on top of the platforms by easily unlatchable mechanical and magnetic holding mechanisms. This dual system can be used cooperatively together or separately independently as toys, movie makers, selfie makers, surveilance devices, novelties, following cameras, taser launching drones, and as observation platforms. Police can use a taser cube launcher to control crazy or violent offenders. They can also use either drone to talk diectly to remote people, or to surveil territory before they themselves go there. Military can also view at a distance or from a high height. Military can attack enemies with explosives, lasers, rocket bullits, and tasers. Firemen can find fire victims or flames via the infrared drone camera. Areal views help surveil fires. Speech recognition commanding controls can alternatively control the drone. As silly as this invention may appear initially, it is indeed practically useful. Imagine a fireman instantly launching a deck-of-cards sized drone to see through smoky fire to find a downed victim, or a policeman launching a drone skyward to help look for a fleeing criminal. The novelty here is the headworn launching / landing platform, as well as, the folding backpack launching / landing platform.