Growing Green on the Moon 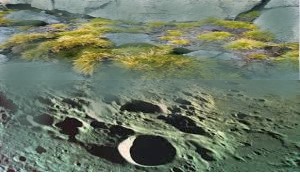 Many moon missions are being carried out by various countries but the end result is not yet known. Temperature on moon surface varies approx. from +130 to -150 degree c. So growing plants is difficult. But plants have an ability to adapt and adjust with extreme environmental changes. We are proposing a plan or kind of thought experiment in which the future moon mission will carry earth soil, water, seeds, and some special plants and specially designed incubator, thermal sensor, auto temperature monitoring and adjustment system etc. along with mini poly house. Some seeds and plants to grow inside incubator with earth like surroundings.

Inside poly house after digging about 2 ft. pit on moon surface, fill it up with earth soil and put some seeds after adding water. In side temperature controlled poly house plant the saplings like antarctic hair grass, pearl wort, polar bushes, mosses, algae, lichens for the very cold temperature. Also plant the sapling which are extremely heat tolerant like rabbit brushes, salt brush, cacti, fern bush, desert willow, hibiscus etc. But plantation should be done only in the pits having earth soil, water and temperature control. After initial set up what is most important is observation such as temperature, moisture content inside poly house and incubator. Some fertilizer may be added to the earth soil before putting seeds and planting of saplings.

What would be the most interesting is to observe the growth of the roots and their directions. Roots always attracted towards water area inside the soil. In order to see the directions some tiny wire less camera may be installed in the surrounding area one ft below the depth of the pits having earth soil and and can be observed on computer monitor. Where the roots would go is really interesting question.

Once it is confirmed that plants are growing inside the poly houses its temperature is to be varied slowly to gets adjusted with moons temperature. Because plants have got ability to gets adjusted with slowly varying conditions. At the same time seeds are getting germinated and their growth also to be monitored. We think initially every thing should work as per plan because of earth soil, earth like condition, water and temperature. As they grow inside the poly house it is of interest to monitor oxygen level inside, as plants gives oxygen and takes carbon dioxide. Root monitoring system may provide us the information about moisture content inside soil and rocks underneath the moon surface. Oxygen level inside the incubator also to be monitored as germinated seeds are now started growing. Oxygen released by the process of photo synthesis in both the units that is incubator and poly house must be added up in the moon's atmosphere.

This is our thought experiment. But may be included in a future moon mission with positive approach. One thing is very sure and that is for human survival we needs oxygen to breath and water to drink. Plants give oxygen and its roots chase the water.