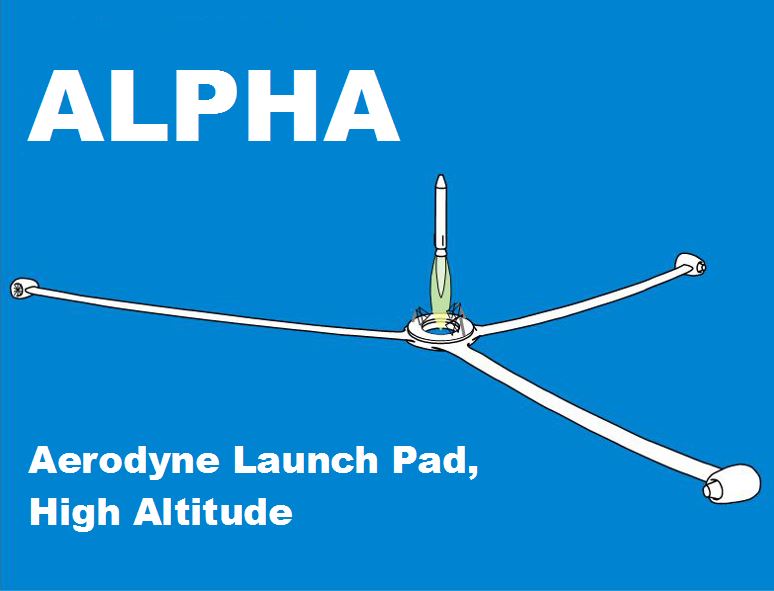 ALPHA is a remotely piloted reusable rotary flying platform for launching spacecraft from high in the stratosphere instead of from the ground.

ALPHA is a better flying launch pad for the "second stage" rocket because this "first stage" can be flown hundreds or even thousands of times with the economy of a cargo jet, significantly reducing the cost of spaceflight.

Launching the small "second stage" from a platform higher than 95% of the atmosphere rather than from the bottom of our ocean of air also greatly reduces aerodynamic stresses on the rocket, allowing the spacecraft to be much more lightly built. This further reduces cost as well as weight which in turn reduces fuel requirements.

ALPHA is best described as a torqueless rotary flying wing or, in other words, a helicopter the size of a jumbo jet that is all rotor with virtually no fuselage. Long slender wings, uniformly spaced, radiate from a disk-like hub. Two wings are sufficient, but three wings or more are preferred for their inherent stability. The entire aircraft rotates about the axis of the launch platform at the hub. The platform is gyroscopically stabilized and does not rotate. ALPHA takes advantage of the same state-of-the-art software and processing power that have made precise control of flying wings routine.

Torqueless rotation, driven by engines at or near the tips of the wings, eliminates the need for a tail rotor and the complex, very expensive and comparatively heavy power train of conventional helicopters.

Each wing is propelled by one or more high-efficiency high-altitude two-spool turbofan engines. The high-pressure and low-pressure spools of each engine are balanced and contrarotating to cancel each other's gyroscopic effects. Otherwise, powerful gyroscopic forces arising from the rotary movement of the wings coupled with non-contrarotating spools would render control of the aircraft nearly impossible.

Centrifugal tension in the rotating wings allows them to be more lightly built than the wings of a typical airliner, further reducing weight and cost. Additionally, the centrifugal effect delivers fuel from the hub to the engines at very high pressure without expensive high-pressure pumps.

ALPHA also saves weight by doing without landing gear. Instead, ground handling is provided by a rotary cradle. The long arms of the cradle support the wings of the aircraft while ALPHA is on the ground. The entire structure rolls on concentric circular dolly tracks. Electric motors synchronize the rotation of the cradle with the rotation of the aircraft during launch and landing.