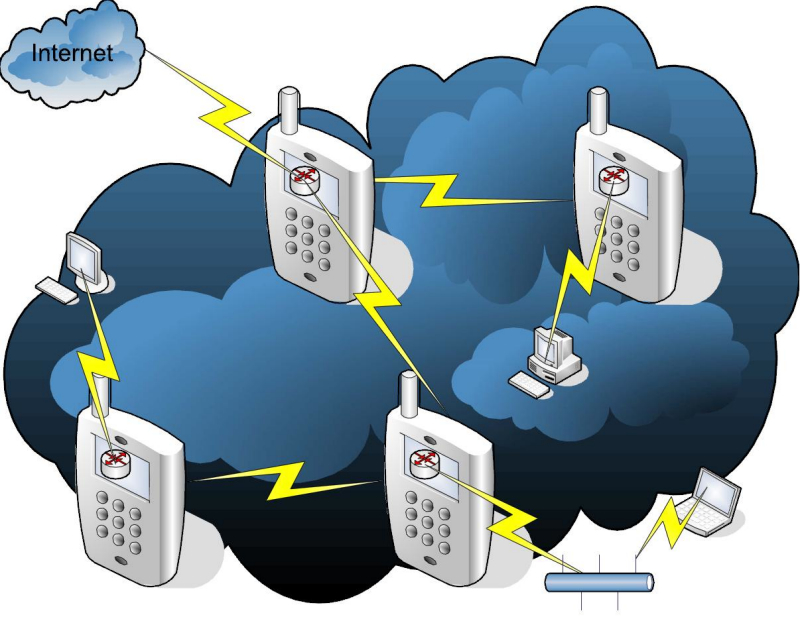 Cell phones can be designed for use off the cellular grid. Phone cloud cellular phones act as Internet routers connected using an ad hoc and dynamic networking protocol. The Internet cloud for these phones exists in large part outside the wired Internet. Instead, phones route through the cloud of phones within range.

Cell phones currently contain the ability to share Wired Fidelity Internet (WiFi) with other devices. These phones then connect to the Internet using 3G and 4G networking technology. Routing is a very simple application that has historically been run on processors quite a bit slower than those currently used by advanced cell phones so adding a routing 'applet for that' would be relatively trivial.

When sufficient numbers of phones become configured with phone-to-phone connectivity, cell towers no longer need to be accessed. The 'Phone Companies' would be taken out of the loop.

As cell phone prices continue to decrease and capabilities increase, it will become reasonable for cell phones to be planted in likely locations where connectivity is needed. For example, a camp ground far from existing infrastructure can be connected via a chain of cheap cell phones strung along the path from camp to town.

Eventually, as costs as well as power requirements get lower, cell cloud phones running on solar electric can be salted across an entire landscape, allowing anyone communication for anybody who may need it.

I imagine tree phones every quarter mile or so that can communicate the consumer's cell phone signal while providing a cell phone for anybody not carrying one but who may need it.

This concept eliminates the shortcomings of cell towers in a catastrophe. New York, New Orleans and Port Au Prince would have been well served with the ability to network and telephone family and friends without the need of a service damaged or destroyed in the event.