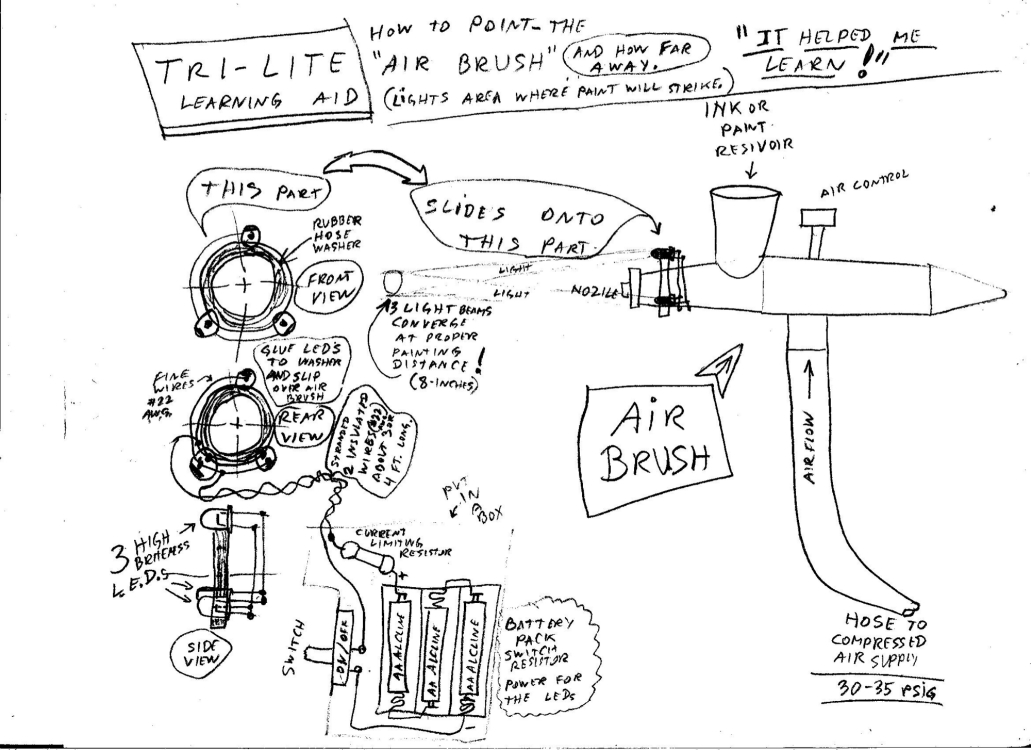 15 years ago, a friend was teaching a class in “Air Brush Usage” and I had some free time, so he let me sit in. I bought a nice “Air Brush” for about /$50 on sale. But, this is all about the hardest part, of using an air brush, by a new user, holding it the “Right” distance, from the surface and pointing it, in the right direction, before pressing the button and spraying the ink or paint. In the first lessons you learn to connect the air supply, and put in the ink or paint, spray large areas, use stencils to paint with sharp (Hard) edges or graduated (soft) edges, and clean the air brush with a fairly complete dis-assembly and solvent or ammonia cleaners.
Then comes the harder part, “Paint a Picture” (This was a “Fine Arts” Class !) You set up the canvas, set up a light, pick a subject, cut any stencils you will need with knife and straight edge or free hand. Now start painting as you are out of delaying excuses.
Hold the air brush eight inches from the canvas. Get too close and the color runs and drips. Get too far and it is too wide a spray and only thinly applied still not right ! Let your wrist twist a little because the air hose pulls on you and the paint goes to a wrong place. I was having a terrible time. So the teacher says perhaps you could put a laser gun site on it.
A Laser was too much, I had some high output LEDs and I found a rubber hose washer was a nice slide fit on my air brush, so I cut 3 notches in the outside edge of the hose washer and epoxied three LEDs to the equally spaced spots, then connected the wire leads on the LEDs together with pieces of #22 insulated solid wire. Three or four feet of stranded wire (Long enough so I could put the battery pack on the table or easel and not struggle with it.)connected the LEDs to the battery pack of three “AA” Alkaline cells and a switch and a limiting resistor, mine was 470 ohms but it depends on the LEDs.
Put the LEDs and the rubber washer on the air brush and carefully bend them to converge the circle of light from each to a point 8 inches from the air brush and at the point the spray hit (I used water to set the alignment as it was easier to clean up.) Now point the airbrush with the LEDs on and move in or out so all three light beams converged and the paint or ink hit RIGHT THERE. And then, when I finished the class I put it away, In a box with the air brush.