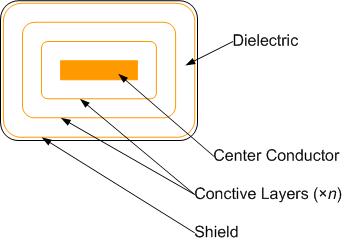 One problem with serial data cabling is capacitance between either the signal and return lines or signal and shield such as with coaxial cables. My idea is to use decoy signals to absorb the brunt of transmission line capacitance, freeing up the desired signal to be clean and sharp at the receive end. How it works is simple. Instead of having twisted pair or a coaxial cable, one may design a new kind of coaxial type cable which has in essence, multiple layers of shielding which have the same impedance between any two adjacent layers including center conductor. Only the outer layer is grounded, while the center conductor and all layers between it and the outer shield carry duplicate signals. The transmitter side consists of separate transmitter circuits for each layer of the cable but the same signal is fed into each transmitter. It may be that each transmitter has its own isolated power supply, while sharing the same ground. The receive end has only one receiver for the center conductor, and termination resistors for the other layers. The outermost signal layer in the cable will be the most distorted at the receive end, while each successive inward layer will be less and less distorted, mitigating the effects of transmission-line capacitance. This architecture could be scaled to allow transfer rates in the hundreds of terabits (Tb) per second. Since such a coax constructed with conventional means would be expensive, an alternate means could be to fabricate a single, ultra thin conductive strip, then coated with a dielectric paint, then metalized and re-coated, metalized and coated again, repeating the process as many times as required to obtain the number of layers needed to achieve desired transfer rates (see illustration). It may also be implemented on a printed circuit board, making it ideal for next generation PC buss types which are much faster than PCIe or SATA. With current developments in newer transistor materials such as Graphene and other atom-scaled technologies, it may be time for a serial data architecture ready to handle the kind of speed they may be able to put out. This should also prove useful in active probes for extreme speed Oscilloscopes, Logic Analyzers and any other test equipment which digitizes analog data.