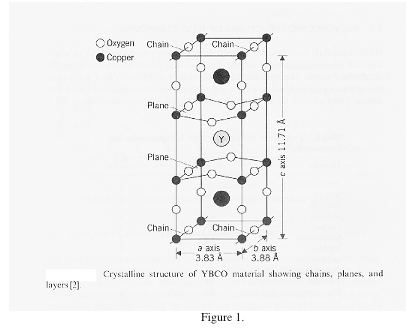 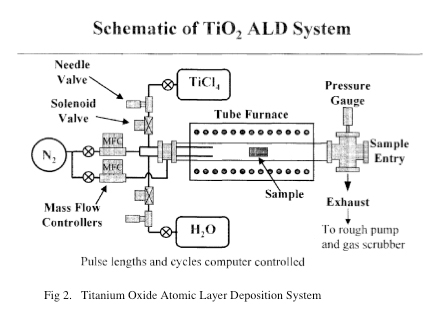 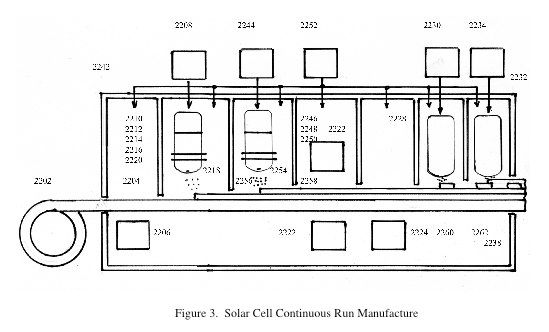 Current high temperature superconductors are based on a copper-oxide lattice with two different interstitial atoms, typically rare earth, spaced in adjacent lattice cells. This configuration, formed naturally when stochiometric quantities of the raw ingredients are baked in an oxygen atmosphere, is superconductive slightly above the boiling point of liquid nitrogen, but substantially below room temperature. See Figure 1.
The theory of superconductivity, notably the BCS theory, considers that electrons join in couples or longer trains along the copper-oxide lattice framework. These electrons interact with the outermost electrons in the d-orbitals of the lattice. Asynchronous atomic vibration of the lattice atoms (increased temperature) or high external magnetic field or high current density tends to cause a transition to normal from the superconductive state.
Critical examination of the copper-oxygen-copper bond angle yields a definite correlation between increasing superconductive transition temperature and decreasing the opening of the angle. This bond angle is substantially determined by the atomic volume of the interstitial atoms. But a too acute angle will not form spontaneously in an elevated temperature bath, the current manufacturing technique.
Atomic layer deposition, a nanotech materials processing technique, will allow sequential buildup of the superconductor lattice, with deposited rare earth atoms, in a non-thermal equilibrium configuration. See Figure 2, for a titanium-oxide ALD system. This technique can create a far more acute Cu-O-Cu angle, and hence a far higher critical transition temperature, expected to exceed 400 degrees Kelvin.
This nanotech process, combined with continuous run processing instead of batch processing, will yield significant economies in overall fabrication. This process can be directly applied to solar cell manufacture as well. Continuous run manufacturing techniques for solar cells, such as done by Nanosolar, Inc., show a 5 to 1 cost improvement, with increased reliability. See Figure 3, for a schematic of a continuous run production process.
Regular production of room temperature superconductors for transmission lines can reduce the nation’s power bill by 50%. Use of these techniques for cost-effective solar cell manufacture has the ability to completely eliminate fossil fuel generated electricity.
The above work is the subject of three submitted patent applications, and has been in process over 6 years. The inventor holds advanced degrees in physics, mechanical (nano-science) engineering, electrical engineering, and business. He is a registered professional engineer and former DOD engineering supervisor for advanced manufacturing processes. Any award so made would be devoted exclusively to production of these devices.