Solution to blowouts in oil wells 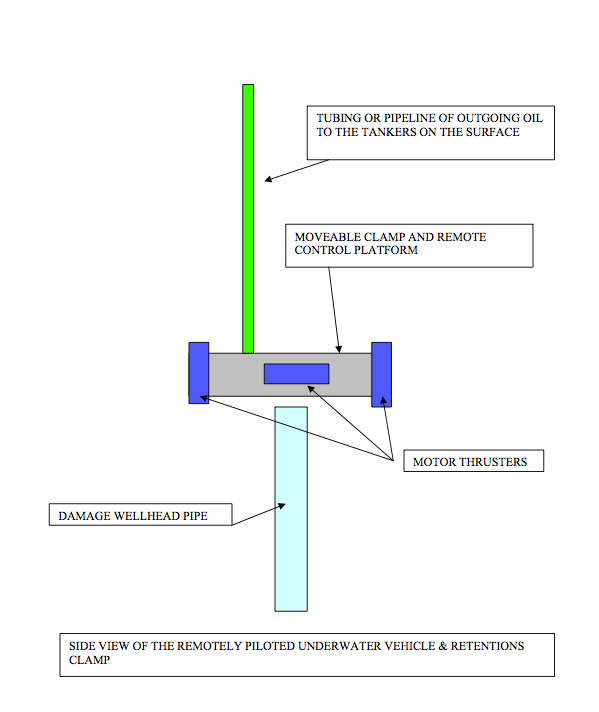 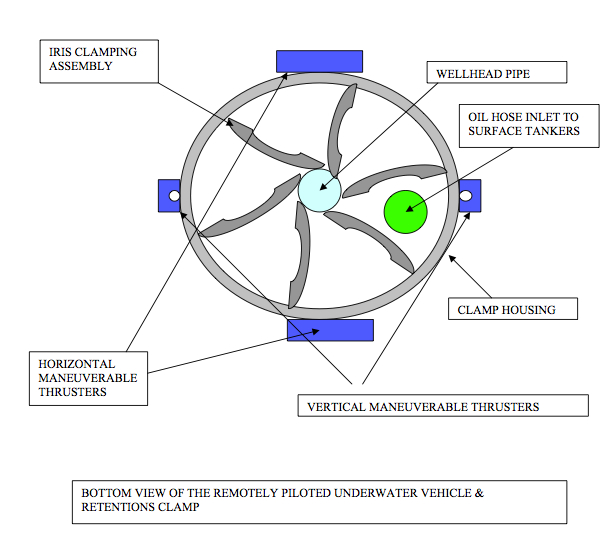 The solution to the current oil blowout within the Gulf is quite simple if you think outside the box. What we need is an elegant design that can fit over any broken oil pipe of any diameter at any angle at any depth. One solution to most underwater oil blowouts is to integrate two existing technologies such as the remotely piloted underwater vehicle and a retention clamp. With the integration of both technologies, the clamp embedded on the remote controlled vehicle can maneuver to the broken pipe and clamp over the leakage controlling the oil spill. The retention clamp is composed of an articulated mechanism that can contract over an exposed pipe with a mechanical clutch assembly similar to an iris of a camera.

There are additional factors one must consider for successful capping of an underwater oil well. First, it would be impossible for the vehicle to hover close to the blowout with the oil flowing at such a high rate of speed. To compensate for the inrush of currents surrounding the well head, the retention clamp is configured with a pipe line connected to the ship on the surface. Once the clamp is in close proximity to the pipe, the ship will start to pump the sea and oil at the same rate. The stronger the force on the clamp the more the ship will suck the water into the holding tanks. The pump within the tanker is counter acting the oil pressure on the clamp allowing a smother capturing of the oil well pipe.
Secondly, the clamp device must have maneuvering thrusters large enough to allow the entire assembly to maneuver. Furthermore, the tube that transports the oil would be a flexible hose or pipeline that must be neutrally buoyant.

Another scenario would be a two stage process, where the first stage would be to locate and capture the wellhead pipe with the remotely controlled clamp. This clamp is designed in such a way as to capture the pipe securely and still allow the forces of the pressurized oil to flow through the clamping assembly. Once the clamp is over the pipe, it will contract until capping the well pipe. The second stage would be to lower a pipeline from the ship from the surface for later connection. However, there is a danger of capping the well at this time. There is no way to know the extent of the damage to the well and subjecting the pipe to such pressures can further damage the well risking further leakage into the environment. Therefore, the solution the above issue would be an oil diversion valve. Once the clamp is secure to the pipe the oil will flow out to the sea until the ship on the surface can connect to the clamp and valve assembly. Once matted to the pipeline from the surface the valve would close forcing all the oil into the pipeline without incurring large pressures at the wellhead.