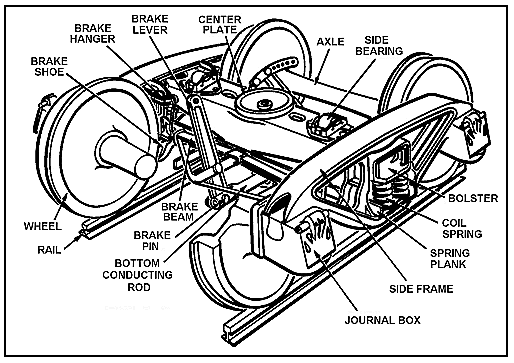 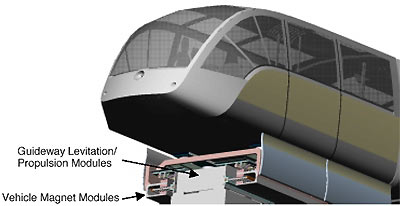 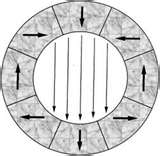 Thanks to a great marketing campaign, most TV watchers are now familiar with the fact that CSX trains can move a ton of freight 432 miles on a single gallon of fuel. But what if we could increase the efficiency of the train technology? The lowly train truck that supports the weight of the car it sits under uses journal bearings and grease to provide the sliding surfaces necessary for both the wheelsets to rotate. At least some portion of the energy needed to move a train is lost to the friction in each bearing. With trains of coal numbering over 160 hopper cars, 1920 sets of bearings contributing to the load the engine must overcome. The cost on fuel and care for the axles adds to the operational price of every train, even when they are empty.

Maglev technology replaces the traditional truck arrangement with a set of magnets, allowing the train to levitate off the track, removing all friction. While this design technology is currently in service throughout the world, it requires a special track system. With over 140,000 miles of traditional rail already in place, it is highly unlikely it would be cost effective to substitute one form of track for another.

The solution to this problem is not to replace the track, but the bearings in the traditional train truck with magnetic bearings. Halbach arrays, built from ordinary magnetic materials arranged in specific arrangement patterns, have been successfully demonstrated as passive devices capable of providing levitation for trains. Wrapping Halbach arrays into cylinders allows the magnetic force of the array to be concentrated either to the inside, or to the outside the array.

Halbach configurations do not require specialized magnets, only that they be mounted in specific orientations. Current truck design would have to be modified to replace the journal bearings with Halbach bearings, but otherwise would not require any special manufacturing technology.

The ease of truck substitution and the potential savings in the cost of fuel make this a very easy idea to sell. Truck assemblers would have a new item in their product line. Rail system operators, such as CSX could save on operations expenses, garner better publicity, and sell the carbon credits. An energy-efficient transportation system based on a passive technology would reduce the fees added to products for transport, while saving the planet. This is a better mousetrap for everyone.

This solution requires a bit of up-front non-reoccurring engineering effort to design the bearings. Train trucks could be built on an as-needed basis and installed whenever the rail car owners could afford to make the swap. The return on investment would be in the reduced maintenance, fuel savings, sellable carbon credits, good public relations, and a cleaner planet.

Once the fundamental design has been established, this simple, passive design could be applied to any use of bearings in commercial and consumer products. Reducing machine friction to zero would potentially save the planet.