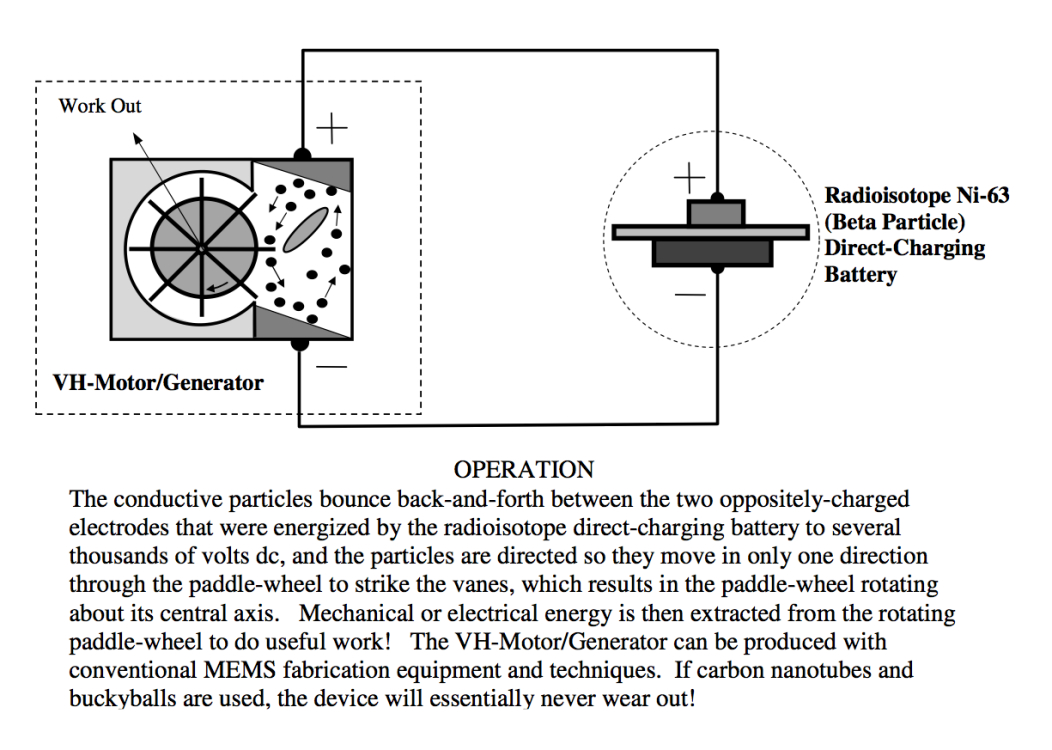 A radioisotope direct-charging battery, also known as an atomic battery, can normally be compared to a parallel-plate capacitor with a self-charging plate. Electrically-charged particles, such as alpha or beta particles, are emitted from a radioactive source and pass through an insulating or dielectric medium before being deposited onto a collector-plate where the output voltage of the battery as measured between the emitting-plate and the collector-plate can be of a magnitude of tens or hundreds of thousands of volts dc. Radioisotope direct-charging batteries have been around for over a hundred years, yet there is still no effective means for utilizing their high voltage dc output to do anything useful. Electronic components, especially switches, are simply not available for converting the high-voltage electrical energy into either lower dc voltages or other more usable mechanical forms for driving electrical or mechanical load devices, especially at small physical scales (MEMS and NEMS). More amazing is the fact that there is no thermodynamic heat conversion process occurring in the direct-charging nuclear battery, so the efficiency is not restricted to the Carnot bottleneck of temperature extremes. Volta invented a device called Volta’s Hailstorm where conductive spheres or vermiculite particles bounce back-and-forth so fast between oppositely-charged plates as they transfer electric charge that it literally looks like a hailstorm! Surprisingly, electrical energy is efficiently converted directly to mechanical energy in a Volta’s Hailstorm device, yet there seems to have been no previous attempts to convert the motion of the moving particles into more useful forms. The V-H Motor/Generator, for Volta’s Hailstorm, obviously works on principles derived from a Volta’s Hailstorm device and you can even make one yourself! Take a plastic container full of tiny copper-coated polystyrene balls (1/32” diameter) and place it near the energized dome of a Van de Graff generator or near the plates of a running Wimshurst generator, and the balls will move back-and-forth between the two container ends so fast that you will not be able to see them (a hailstorm!) Now, if you place a very small non-conductive water-wheel or paddle-wheel type device in the stream of moving balls, and then direct the balls to move one way through the paddle-wheel, you will see the paddle-wheel spin! The previously unusable extremely high voltage electrical energy of the direct-charging atomic battery is first converted to mechanical energy in rotating the paddle-wheel, and the energy of the rotating paddle-wheel is then converted to a useful mechanical output or else to a very usable low-voltage AC or DC electrical output. This radioisotope micro-power source would then be a good candidate for use in providing portable electric power to soldiers in the field to operate electronic equipment and weapons. It can also provide unlimited power to commercial or privately-used electronics devices, such as cell phones or laptop computers. The small amount of radioisotope material needed to provide power to a cell phone for even several years makes it safe, and if necessary, the cell phones can be registered to the owner and eventually recycled.