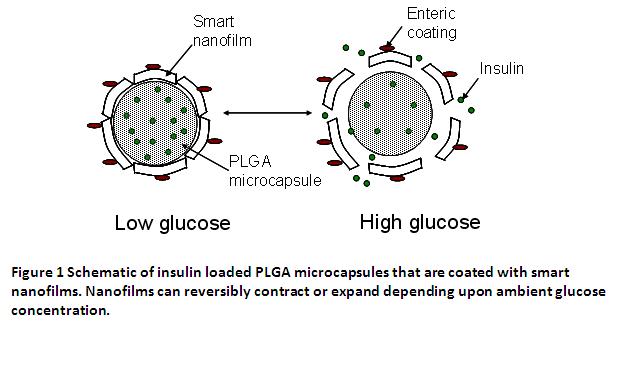 Diabetes affects more than 20 million Americans (7%) and nearly 250 million persons worldwide in its two primary types (Type I “insulin-dependent”: ~10%; Type II “insulin-resistant”: ~90%), resulting in a huge economic and social burden on society. To date there is no cure for this disease. Complications such as cardiovascular disease, stroke, hypertension, retinopathy, nephropathy, neuropathy, periodontis, gingivitis, and cataract formation are common and tend to develop with time. Clinical trials have shown that proper care and management of blood glucose levels are critical in delaying the progression of complications in both types. Therefore, diabetics share a common need of continuously monitoring and subsequently restoring their blood glucose level to the normal glucose range (80–120 mg/dL) by injecting insulin.
There are two main problems associated with the current form of insulin therapy. First problem results from the fact that insulin is a peptide drug which has to be administered by the parenteral route because of its poor bioavailability when delivered by oral route. However, the use of injections on a daily basis for the long-term management of diabetes also results in excessive pain, discomfort, increased cost, and the creation of potential infection pathways. Therefore, there have been significant efforts towards the development of a technology that can result in a non-invasive and effective delivery of insulin to the circulation. The second problem arises from the excess dose of insulin that leads to hypoglycemia, which can result in patient’s sudden death. In healthy animals, the rate of insulin secretion and its release are directly proportional to the blood glucose level. Therefore, in order to avoid hypoglycemia there is a need to imitate the functioning of a healthy body, where the rate of insulin delivery and glucose concentration are related by a positive-feedback loop. This issue has also been heavily investigated in the past. Nevertheless, to the best of our knowledge, no research in the past has addressed both the problems together and, therefore, there is still a serious need for the development of technology that allows the controlled and targeted release of insulin while being noninvasive. I propose to develop insulin loaded smart-microcapsules that can be orally administered and thereafter transported to the circulation in the body and release insulin in a controlled fashion, such that the rate of release is directly proportional to the glucose level.
Figure 1 shows the schematic of an insulin-release vehicle that we are proposing here. PLGA microcapsules