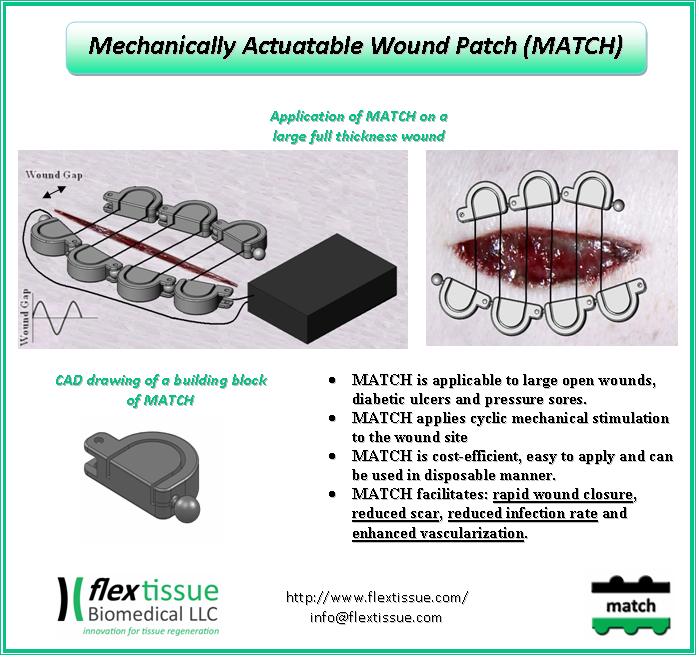 Description and Application:
MATCH functions by adhering pads on two opposing wound margins. It does not interfere with application of wound dressings. Flexinol actuator wires are then threaded between the pads (similar to running subcuticular suturing technique). The actuator wire is a shape memory alloy, which contracts under applied electrical current, bringing the wound margins closer. A battery powered portable circuit board controls the actuation of wires in a cyclic fashion. The cyclic mechanical contraction of the wound creates tissue creep which forces the wound to close quickly without overstressing. Additionally, the cyclic loading of the device promotes new tissue growth through cellular proliferation and vascularization of the tissue through a concept called as mechanotransduction.

Manufacturability and Cost-effectiveness:
MATCH is novel because it provides an easily implemented and economical design to enhance wound closure. MATCH includes no moving parts (except for the contraction of the Flexinol wires) and it can quickly and easily be adapted to fit any size or shape of wound. The modular design allows the clips to quickly snap together and rotate to quickly accommodate different wound profiles in 3D. The Flexinol wires can be easily threaded allowing for quick implementation. The entire device can be incorporated into current wound dressings as it can be applied as an additional layer in the current dressing procedure. MATCH can be manufactured by plastic injection molding and the electronics can be placed on a small printed circuit board. Flexinol actuator wires are available commercially at a low cost. The manufacturing cost of MATCH is low, making the product cost effective in the marketplace, which would also allow disposable or single-use application. MATCH therapy presents a low cost alternative to the current methods.

Marketability:
Collectively, 7.5 million large open wound procedures occur each year and they consume an estimated $70 billion annually in the US. While several segments are mature in surgical and trauma wound care, wound closure segment is still developing and therefore open for new products. Wound closure market had a value of $4.8 billion in 2008 and expected to grow to $6.1 billion in 2013. The physical and miscellaneous treatment of large open wounds had a global value of $1.5 billion in 2009 and estimated to grow to about $2.3 billion in 2013. The proposed MATCH technology by FlexTissue Biomedical LLC targets to claim a share in this a $2.3 billion market by 2013.