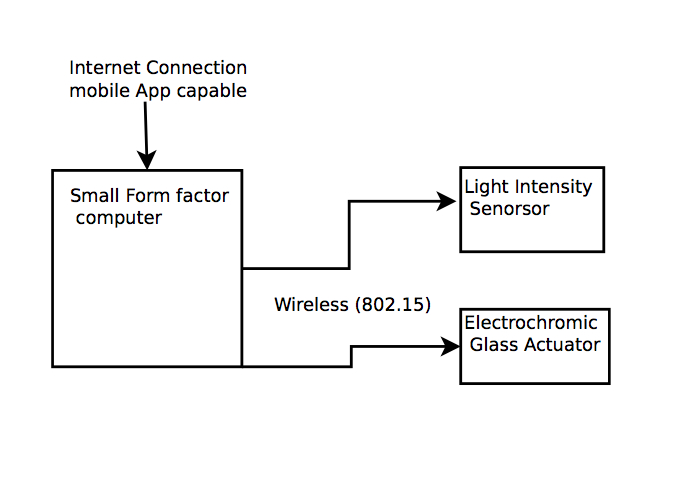 The key problem in the future is the supply of energy and its impact on our climate. One of the key factors in solving this problem is reducing demand for electricity. Smart grid technology has been invented to deal with reducing electric demand at key points by altering the consumption of major electrical appliances. The other big source of electric demand in the United States is air conditioning in the summer. The two ways to decrease electricity use in air conditioning are increased air conditioner efficiency and reducing thermal energy that enters the building.
I am proposing that a series of sensors that would communicate with a computer that could be also used as a smart grid system. Light sensors The sensors would be light sensors connected to 802.15.4 transmitters. The information about the amount of light would be used to adjust the amount of light transmitted through electro-chromic glass or other external shade sunlight protecting environment. The National Renewal Energy Laboratory has calculated that if the United States installed electro-chromic glass several quadrillion BTU's. The current energy consumption is in the area of 94 quadrillion BTU's and unless we change our energy use will only continue to grow. Another set of sensors would be connected to receivers in order to allow the amount of light accepted to change in real time.
The key to this system is the small form factor computer that would receive solar data from the web. Then using a model of the surrounding horizon the computer would adjust the amount of light accepted by the glass. The computer would be able to make decisions affecting the amount of light transmitted through the glass using the model and the light sensor data. This is important since electricity usage can be reduced by using as much sunlight as is necessary to illuminate areas. The computer would be connected to the Internet so that a mobile application, or other web based control panel would allow the residents to adjust the controls as they wish.