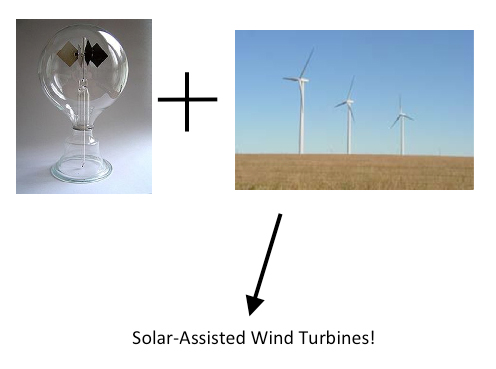 The Crookes radiometer consists of a partially-evacuated, airtight glass bulb containing a set of vanes mounted on a spindle where each vane is silvered on one side and blackened on the other. Rotation of the vanes and spindle occurs when the vanes are exposed to light or heat. The reason for the rotation has been attributed to thermal transpiration. Osborne Reynolds found that if a porous plate is kept hotter on one side than the other, the interactions between gas molecules and the plates are such that gas will flow through from the cooler to the hotter side (thermal transpiration). The vanes of a typical Crookes radiometer are not porous, but the space past their edges behaves like the pores in Reynolds plate. On average, the gas molecules move from the cold side toward the hot side whenever the pressure ratio is less than the square root of the (absolute) temperature ratio. The pressure difference causes the vane to move cold (white) side forward. Note that if light pressure impinging on the silvered side of the vanes was instead causing the vanes to move, then they would spin in the opposite direction and this does not happen unless the air is evacuated until a very high partial vacuum exists inside the glass bulb. \r\n Surprisingly, it can be demonstrated that a simple yard windmill that has its vanes blackened on the windward side (side struck by the wind) and silvered on the leeward side will spin faster than normal when exposed to both sunlight and a slight breeze! It can even be shown that the windmill will continue to spin when sunlight strikes the vanes, but when no wind is blowing at all! Thermal transpiration is evidently at work causing the yard windmill to spin from the heat of the sun as eddy currents of air flow from one side of the vanes to the other even though the vanes are offset forty-five degrees or so from the vertical position. This “solar assist” effect may admittedly only be noticed in the yard or ranch-type windmills because of their many thin, knife-edged vanes for the air currents to move around (a large combined edge-length), but suppose the same solar-assist effect can be made to occur on the very large three-bladed wind turbines that are in wide use today. If that were the case, then solar energy can be used to supplement the work derived from the wind to spin the turbines and generate electricity! Moreover, the fact that energy from the sun works to spin the turbine implies the solar energy is converted to alternating current by the same turbine generator. Compare that to the lack of efficiency in converting low voltage direct current electricity generated by photovoltaic cells instead. \r\n Just think, solar energy may be able to add five, ten, or even twenty-five percent more work output to the solar-assisted wind turbines by doing nothing more than blackening one side of each blade and silvering (whitening) the opposite side!