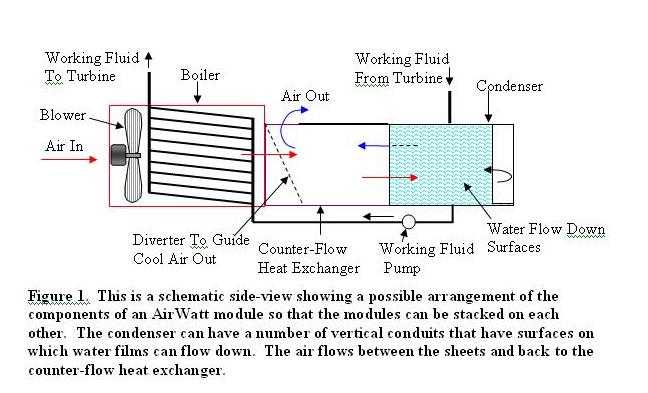 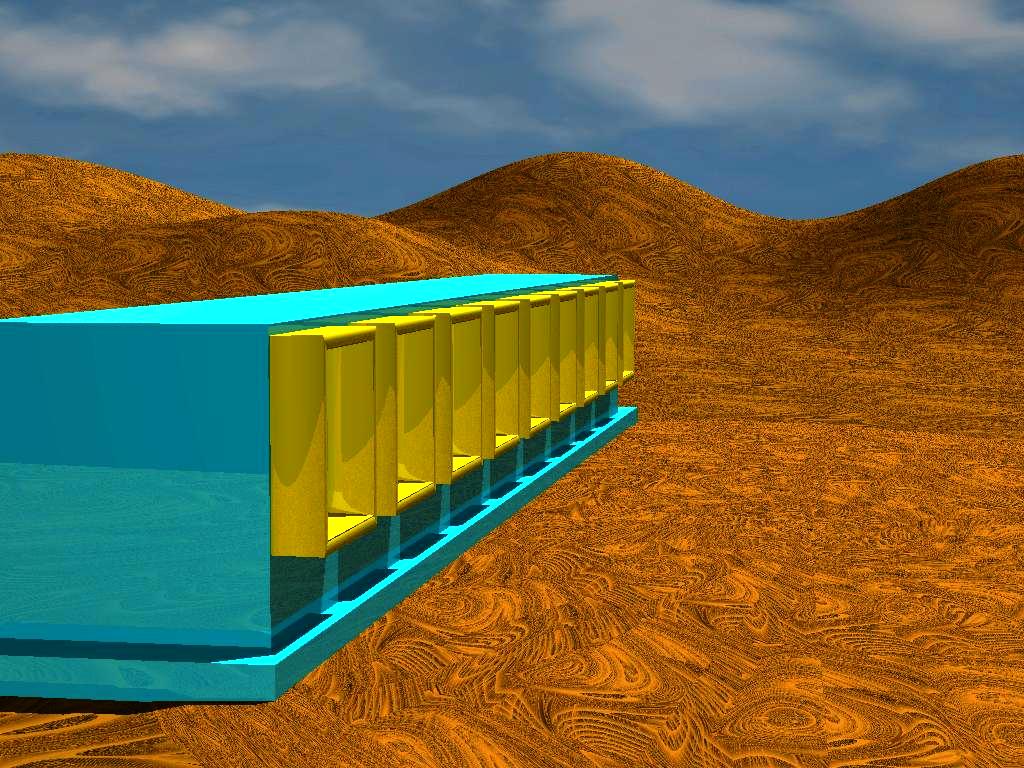 This is a new concept in renewable energy production, called AirWatt. It can produce much more electrical power per unit area of land than solar, wind, or hydro power plants. Whereas solar works only during sunlight hours, the AirWatt power plant can usually run 24 hours per day in appropriate locations. AirWatt plants use atmospheric air as the heat source and evaporating water as the heat sink. The warm air is used to boil a refrigerant, which turns a turbine, and the water evaporation condenses the refrigerant.
Our computer simulations of the thermodynamics and aerodynamics have already demonstrated that AirWatt functions well.
The average amount of water flowing through the turbines at Hoover Dam is about 500 cubic meters per second as it produces 550 MW of power. If only one-tenth that much water were pumped out of Lake Mead to an AirWatt Power plant out in the desert, it could produce 6,300 MW (6.3 GW) of power. That is over a thousand times as much power per gallon of water as the power output of Hoover Dam.
We have performed patent searches and have found no comparable technologies. We have filed a patent application on AirWatt. Proposals have been made to produce temperature differentials using air and water, but those methods do not produce as large temperature differentials as our method. There are currently no power plants that use only air and water. Our method will make such plants very practical.
If water is evaporated on a surface, the temperature achieved is normally the wet-bulb temperature. If the air is cooled before it reaches the surface, a lower temperature is achieved. One AirWatt innovation is that a stream of air flowing through the boiler is cooled. A second innovation is that this air is cooled further in a heat exchanger, and then it flows to surfaces in the condenser where water films are flowing down. Since the air has been cooled considerably, it becomes quite cold as it evaporates water on the condenser surfaces. After the cold air leaves the condenser, it flows back through the heat exchanger to provide cooling for the incoming air. See the attached illustrations.
The calculated cost of electricity from an AirWatt plant is 3 cents per kWh.
The attached table shows the 24-hour power output in the summertime for an AirWatt plant at Las Vegas, which can use that power for air-conditioning.
A proposal for a California EISG grant was submitted for AirWatt. One of the scientific reviewers said, “This proposal addresses a very important renewable generation opportunity. The scientific approach is sufficient to validate the thermodynamic feasibility. To this reviewer’s knowledge, this innovation is completely original and unmatched. This project would benefit California’s grid connected electric customers.”
Another reviewer said, “This proposal is very well thought through and sound, and has terrific potential to open an interesting area of research and development.”