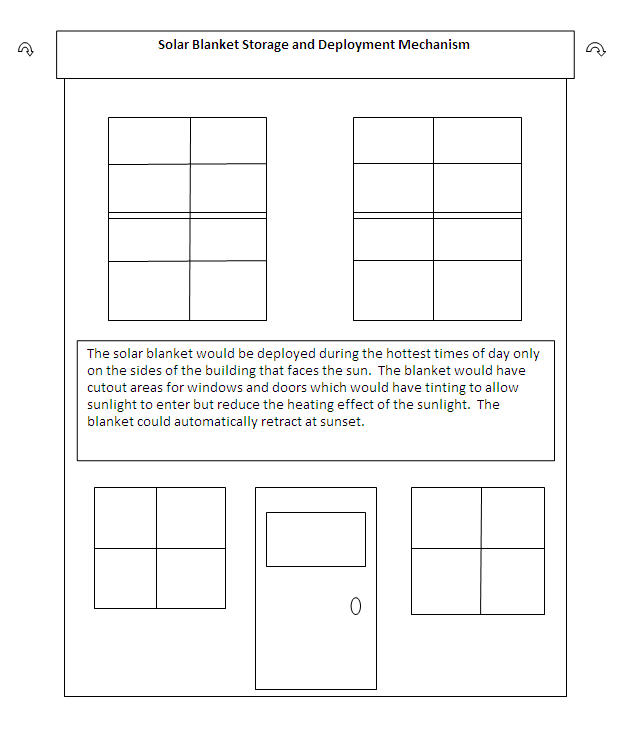 Many older buildings including homes are constructed or painted with dark, heat collecting materials that increase the cooling costs in the summer months and do little to heat the home or building in the winter months. If the sun’s heat could be collected and/or reflected away during the hottest times of day energy needed to provide cooling could be saved. The mechanism would be deployed similarly to a projection screen used in many auditoriums.
I would propose development of a deployable, light reflecting blanket that could be deployed like a projection screen to the outside of a building during the sunniest, hottest hours of the day that would reflect the majority of the sun's heat away thereby reducing the cost to cool the structure. There could be cutouts for windows so that light could enter the structure. These cutouts could utilize a material to allow light to enter but limit heat entry. In the winter the blanket could act as a shield against cold winds as well as produce electricity. Deployment and retraction of the blanket could be done automatically as the amount of sunlight and heat increases.
This blanket could have flexible photovoltaic cells on the outermost layer to product electricity and the blanket could also have channels to pass water through to preheat domestic water for bathing and other uses. IBM has developed highly efficient solar cells that use magnifying lenses to improve power output but need a cooling mechanism such as a liquid metal system to prevent melting of the solar cell. The water flowing through the blanket could provide most or all of the cooling for these solar cells while producing hot water.
This blanket would be placed on the sides of the building that receive the greatest exposure to the sun.