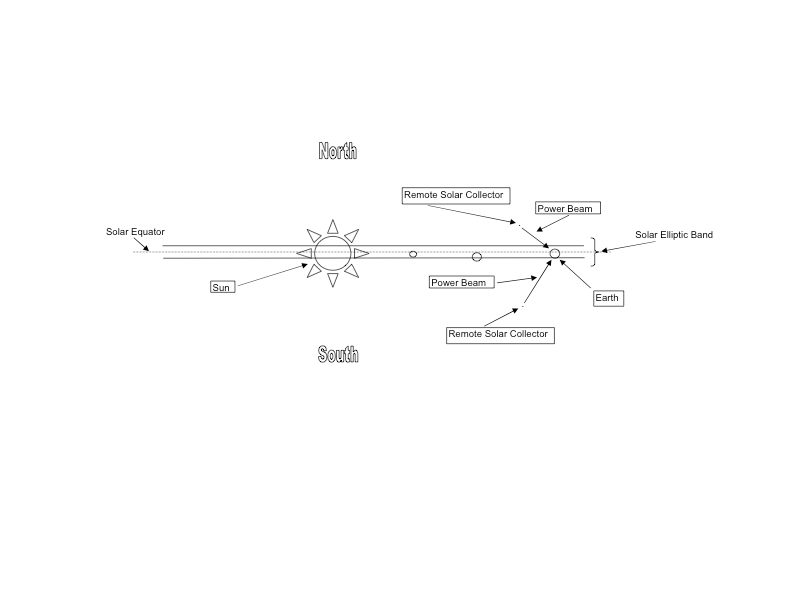 Solar Power Collector, Above or Below the Solar Elliptic Plane

NASA & the Department of Energy need to work together to develop space based Solar Power Collectors [SPC] that are off the planetary solar elliptic. This is energy that has never been available to the Earth. Power/Energy is the real currency of the world, Dollars should become Sollars; where 1 Sollar is 1 human’s work in a day.

The Sun is the source of all power [chemical, geothermal, radioactive] that is on the Earth. The power on Earth has been placed in ‘storage’ and we are removing it from storage for our own use.
We need to go to the source and derive power/energy directly from the Sun.

The SPC would be a silicon solar cell mounted to an aerogel frame with the copper conductor insulated by the frame. [Due to the low temperature of space a super conductor may be more efficient.] The SPC needs to be moveable in the Solar Wind, so it should have a triangular ‘sail’ structure that allows the ‘points’ of the sail to be positive, negative and neutral. This would allow remote operators to move the SPC as needed. The SPC needs to be modular so additions to increase its functionality [size, control, efficiency, etc.] can be made in the future.

Energy transfer from the SPC to Earth should probably go to the Moon then Earth. Drawing a straight line millions of miles long without a wobble at the terminus seems unreasonable. Power collection at the Moon with a ‘short’ power transfer to the Earth seems more feasible.
The final transfer leg from the Moon to the Earth should be a pulsed laser shot instead of a continuous standing wave beam. The target for the solar energy should be a salt pit. Molten salt will store the energy and allow for a measured transfer energy to the power grid. This plan will allow us to use the technology that we develop for geothermal power.
In addition to providing power/energy to Earth, this plan will allow for power/energy to explore the solar system. It should be able to support remote and manned missions of exploration.
Note: the State Department might have to discuss the idea of pulsed power shots to the surface of the plant with the other nations of the Earth.