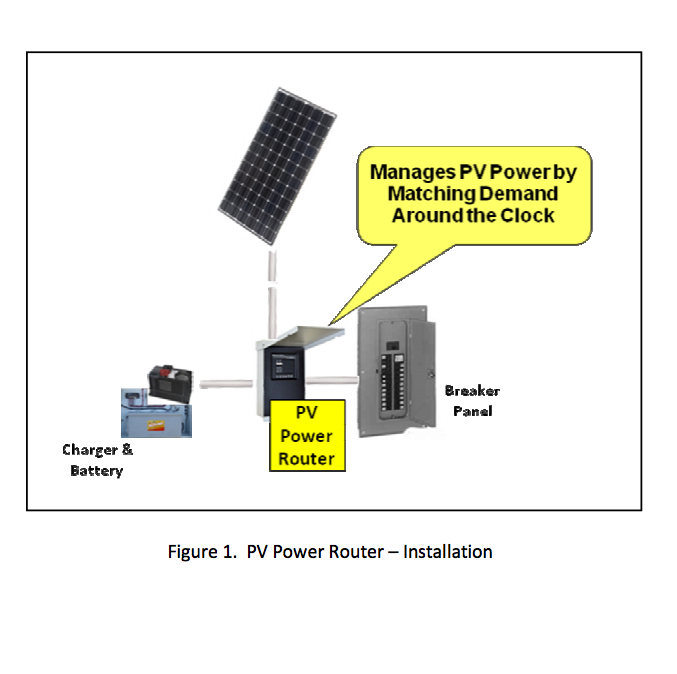 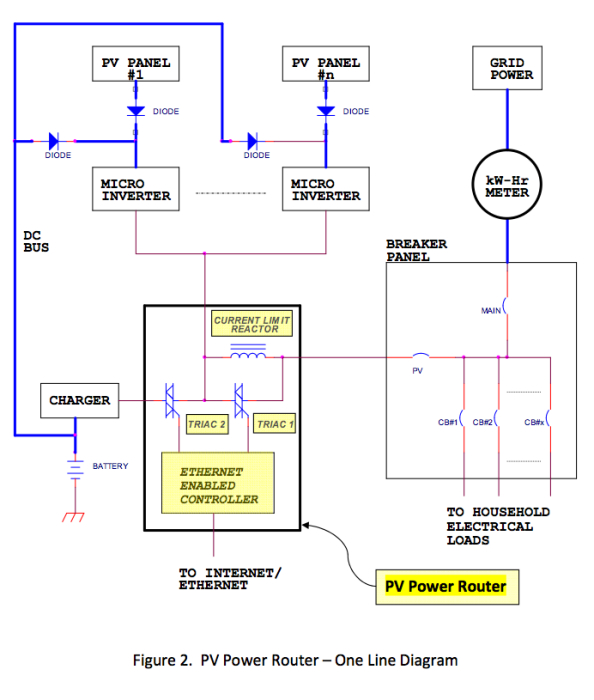 When a home owner installs a Photo-Voltaic (PV) system to generate renewable solar power, he/she must sign a contract with the power provider. In addition, the home owner must pay the power provider the cost of a new 2-channel meter and its installation – not a small price. The 2-channel meter tracks how much power is used (charged at full $/kW-Hr rate), and how much surplus power (credited at 30% to 70% of full rate) is put back on the grid. For the home owner, it is most economical to use all of the power generated by his/her own PV system.

The PV Power Router eliminates the need for a contract and the 2-channel meter. It works around the clock to route PV-generated power to the loads only when needed, and stores the rest to be used during sundown. The PV Power Router can communicate with the future smart grid, and smart appliances to substantially reduce peak power demands on the grid by air conditioning during the hottest part of the day. Installation of the router is very straight forward as shown by Figure 1.

The PV Power Router makes full use of the micro-inverter technology, the most advanced solar powered inverter to date. Together they provide the best in safety, reliability, efficiency, cost, size, weight, and simplicity of use. As shown in Figure 2, a small ‘Current Limit Reactor’ allows the micro inverters to draw enough power from the grid to stay synchronized on grid power. The ‘Ethernet-Enabled Controller’ senses the magnitude and direction of current flow through the reactor to determine how much power demand to pass through ‘Triac 1’ to power the electrical loads in the home. When the power demand drops below the level the micro inverters and PV panels are producing, ‘Triac 2’ is turned on to operate the charger to store surplus power in the battery bank. Note that the triac is a solid state switch used to turn ac power on and off. The Ethernet-enabled controller can be implemented as an embedded micro computer, or a dedicated digital processor such as a Field Programmable Gate Array (FPGA) with I/O capabilities to sense, control and acquire data. Codes can be developed to use the future protocol for the national smart grid and smart appliances.

Figure 2 further illustrates the rest of the PV Power Router system. The ‘DC Bus’ powers the micro inverters when the sun goes down using the stored surplus power. The system continues to manage power by demand around the clock to ensure that zero power is placed back on the grid. Both the home owner and the power provider benefit fully from renewable power from the sun. The home owner uses what he/she generates and does not have to sell surplus power at a reduced rate. The power provider and particularly the power generating company can reduce their fuel cost by not having to carry peak loads demanded by air conditioning when the sun is at its peak.