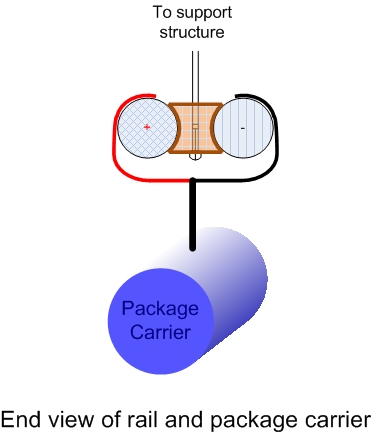 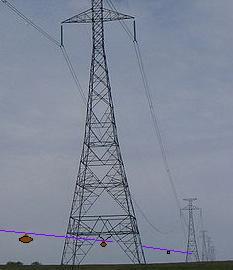 This describes a proposed automated package transport system that supplements current methods for delivering small to medium sized packages. Advantages of this transportation method are both energy efficiency and speed of transport. Installation of the system into the existing infrastructure is possible without major environmental impacts due to the size of the transport vehicles, the physical “footprint” of the system, and the ease of locating this system in most areas.

The package transport system consists of distributed “container cars” that have their own electric propulsion, and operate on a raised overhead single integrated rail assembly. Figure 1 illustrates the basic rail mechanism. The transport network consists of a single, integrated “rail” that contains both conductors and the support mechanism. The single integrated cable-rail assembly consists of two cables supplying the power to each car as well as the mechanical support. Usage of this raised single integrated rail makes this type of transport system tolerant of natural flexure and sagging of the support cables, any structural bending, and the effects of wind and weather. Elevating the structure also has environmental benefits with respect to dangers to people and wildlife.

Figure 2 shows one location for possible installation. The towers for high voltage overhead transmission lines can be used to provide both the physical support structure and the power source. Also feasible are the median strips on interstate highways with support structures needed to suspend the rail. Usage of relatively small container cars will result in smaller support structures than conventional rail.

Advantages of this type of transport network include the ease of installation of the system. Since the physical “footprint” of the distributed package transport system is smaller than conventional ground and air package delivery, this system can be installed within the existing infrastructure without major construction or environmental impacts.

Navigation of each container car is autonomous, based on their contents, and a communication network between the container cars and distributed servers can provide real time monitoring. Each car would know its instantaneous position, velocity, and acceleration, and can activate upcoming track switches to achieve the destination stations. Cars will also know the proximity of nearby container cars (who is in front of and behind them).

The goals of this package transport system are to provide a new, independent “highway” for package delivery, with the vehicles consuming less energy, with a more rapid delivery time. Adoption of this delivery system would also ease both ground and air traffic congestion.