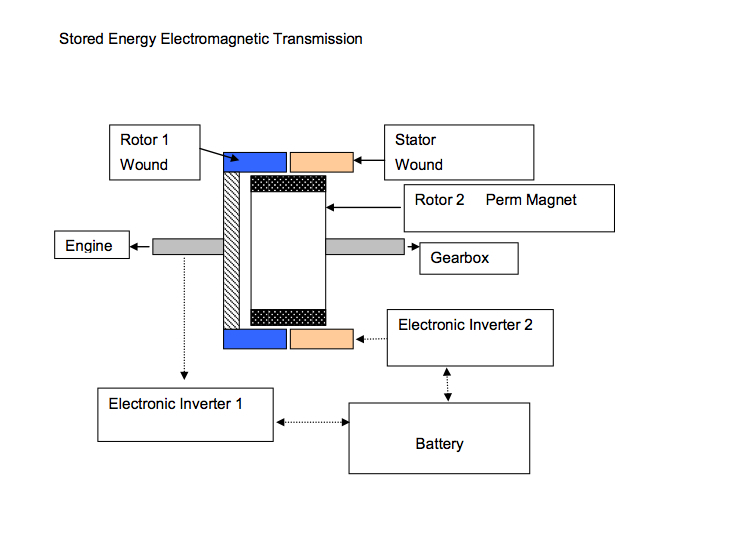 In normal operation the engine drives R1 at an angular velocity ?1 which interacts with R2 and so drives R2 at some speed ?2 where ?1 > ?2. The slip frequency ?1 – ?2 appears at the slip rings, and is fed via the inverter E1 to the battery. If the required torque is greater than the engine can easily provide, inverter E2 operates to drive rotor R2 as a permanent magnet machine, boosting the torque exerted on rotor R2 and hence the input to the gearbox.
Under non-emergency braking conditions, the permanent magnet motor operates as a generator and via inverter E2 feeds energy into the battery.

Under low running conditions inverter E1 shuts down, the engine is stopped, the induction generator R1-R2 is open circuited, and the inverter E2 drives the rotor R2 as an all-electric drive unit using power from the battery.

1) The vehicle is stationary. With gearbox in N the inverter E2 drives the rotor R2, the rotor R1 is shorted, providing maximum drag from R2-R1, and the engine spins up to starting speed.

2) Vehicle moving. As (1) except that the power to spin up the engine can also come from the gearbox, providing the jerk given to the moving vehicle is constrained.