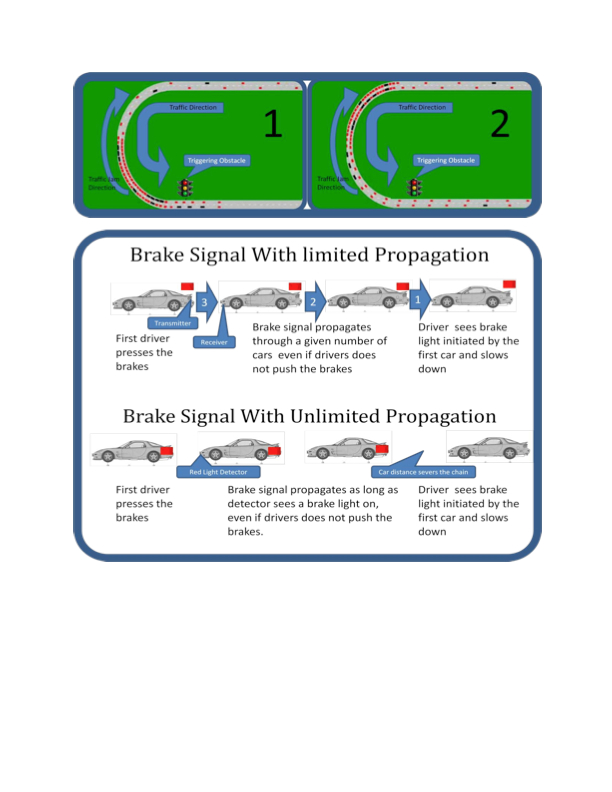 The US and world economy is impeded by the slowness of traffic during rush hours. Reducing the traffic jam problem, on the existing roads infrastructure can have a dramatic improvement on many aspects of our lives. This design idea can do just that using smarter Brake Lights or by mounting a small simple device at back and front of vehicles not more expensive than a TV remote control.

The more devices like that on the road the better the traffic will shape, even without requiring all vehicles to have the device installed at once.

If you observe traffic patterns on congested highways, you will notice that above certain density threshold the flow becomes uneven and worm like. The cars density increases to a total stop, then density drops, distances between cars grow as cars accelerate until the next increase in density and full stop. Those undulations in density happen all over the line of cars and the stops and accelerations waste energy, causes the traffic flow to slow beyond the capacity of the road and usually even without any apparent bottleneck.

A normal driver will slows down based on brake lights signal of the car in front and other driving queues. The problem is that the brake lights signal arrives too late and hence requires a harsher response from the driver not knowing what to expect, hence initiating potential singularity (full stop) of the local traffic flow, which feeds the undulations.

What I propose is a way to smooth that pattern and help average the cars' speed without re-training drivers. By enabling the (Nth) car ahead of a driver in the line to trigger the brake lights of the car just in front of a driver along with all brake lights of the cars in between, we allow the brake signal to propagate through a dense traffic line and cause the body of cars to act more as train cars, in unison, and less as independent individuals, smoothing the undulations, eliminating the jam altogether, hence increasing the effective bandwidth of the existing road infrastructure.

The process is simple; a driver pressing the brakes is sending an infrared signal (or other potentially secured suitable transmission method) backwards with a time-to-leave number (TTL). A receiver in front of the car just behind detects the signal, lights up its own brake lights decrease the TTL number and sends that signal to the next car behind and the process repeats.

The car with TTL 0 stops the propagation; any driver pressing the brakes in a car with the system will initiate the process backwards.

A standalone implementation using a brake light detector is possible where propagation is either unlimited or limited as car distance increase.

This process can improves life quality by reducing time spent in traffic, improve economy, provides drivers early notice of a braking car in-front and hence improves public driving safety. It will save money, reduce fuel consumption and will lead to other product improvements related to inter-vehicle communications.