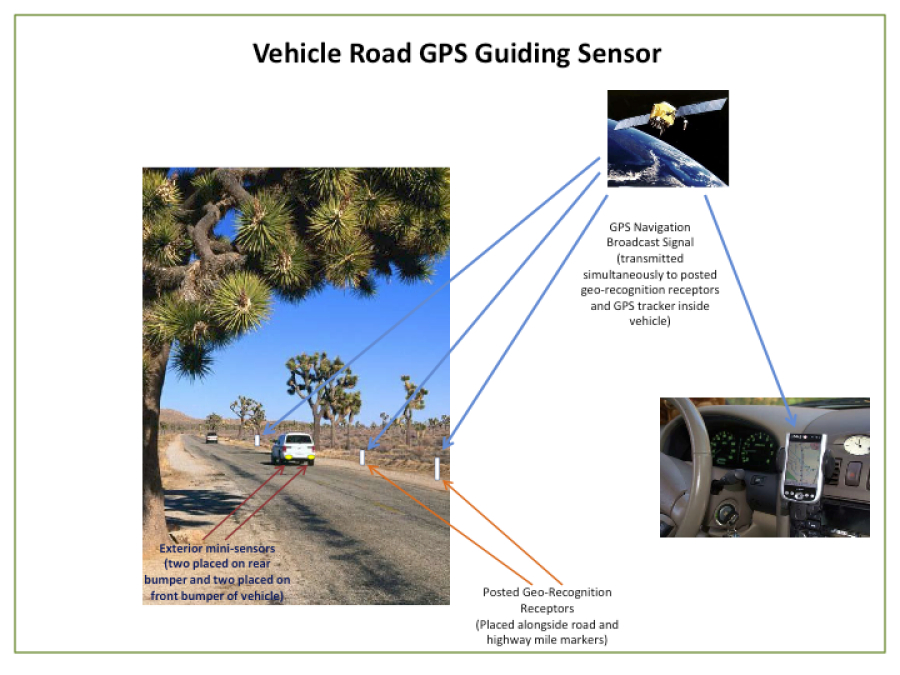 This device would complement current global positioning system (GPS) privately owned vehicle trackers which are sold to anyone who wants to map out a destination or is lost. The device would actually simultaneously transmit a GPS navigation broadcast signal to installed receptors along major highways and roads througout the U.S. The idea of the Vehicle Road GPS Guiding Sensor is to synchronize the device with the vehicle\'s computerized "drive" mechanism inside the ignition module which would also control the vehicle's steering wheel and braking systems. The sensor, which would come with four additional exterior mini-sensors, would be digitally synchronized with a GPS tracker as a combined geo-mapping navigation device and "auto pilot," respectfully, to ultimately drive passengers to their destination. The four mini-sensors would be placed on the corners, two each on each front and rear bumpers of a vehicle. Their dual-purpose design would be to pick up continual GPS navigation broadcast signals and serve as photo-sensors for approaching objects such as pedestrians or other vehicles too close to the front or rear. Once the device is given a destination as provided by the operator, the drive mechanism is automatically commanded to engage the vehicle, controlling acceleration and steering, as the sensor device picks up the perpetual signal of posted geo-recognition receptors along any major interstate highway and throughout all other suburban streets and roadways. The sensor inside the device could also be programmed to recognize traffic signals, police or emergency vehicle sirens, and large objects to the front/rear of the vehicle, rendering the device (and vehicle) to a neutral or disengaged mode. Of course, the passenger/driver would have to remain somewhat vigilant to passively monitor the device as it slowed down the vehicle, stopped or disengaged and would simply reengage it upon resolving any temporary pause in service. Initial coordination for mass acceptance of this device implementation would have to take place with the Department of Transportation (DOT) at the national level and then down to the state, regional, and local levels. After general public review and acceptance by entities like the DOT and Occupational Safety and Health Administration, it would then go into mass production and sales distribution down to retail where every person who would desire it could purchase it or have it installed on his or her vehicle. The roadside receptors, emplaced alongside highway or roadside mileage markers, would work very much like existing cellular phone signal antenna carrier/repeaters that are placed along major populated areas except that their signal would originate from a GPS satellite. In other words, as each vehicle's GPS guiding sensor receives a geo-satellite signal along the path of a given route, the vehicle drives itself to the pre-designated destination without much human assistance. In cases of medical emergencies where a driver could not continue driving to, for example, a hospital, this would have excellent application.