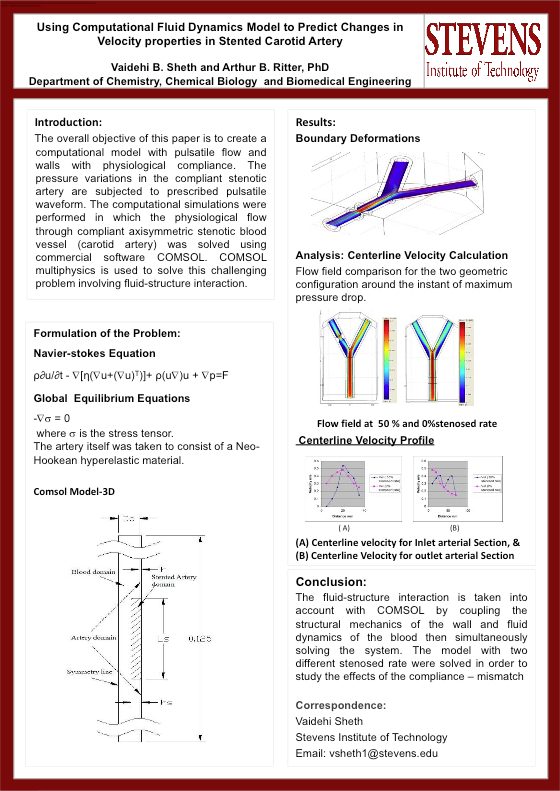 Abstract:
Atherosclerosis is a disease that narrows, thickens, hardens and restructures a blood vessel due to substantial plaque deposit. In the Carotid Artery, the decision to treat using endarterectomy and stenting is determined by the velocity as measured by Doppler flow in the common Carotid Artery. The measured Doppler velocity as compared with the contra-lateral side has been correlated with the degree of stenosis. In some patients, the Doppler velocity after stenting is equivalent to or higher than before treatment. The hypothesis we are testing is that higher velocity measured after stenting may be due to the decreased compliance of the artery wall at the stent region. Geometric models of blood flow through an idealized carotid artery of different types and several degrees of constriction ranging from 0% to 100% were modeled.

The overall objective of this paper is to create a computational model with pulsatile flow and walls with physiological compliance. The pressure variations in the compliant stenotic artery are subjected to prescribed pulsatile waveform. The computational simulations were performed in which the physiological flow through compliant axisymmetric stenotic blood vessel (carotid artery) was solved using commercial software COMSOL. COMSOL multiphysics[1] is used to solve this challenging problem involving fluid-structure interaction. Here we have demonstrated comparisons of the centerline velocities V0=0.40 m/s and V55=0.53 m/s with stenosed rate 0% and 55% respectively with the fluid-structure interaction and their velocity profiles under the physiological flow conditions in the compliant stenotic artery. With these values, flow prefers to avoid the stenosed region which causes additional load on the section with the stenosis. Therefore the structure seemed to translate marginally towards the stenosed section at bifurcation junction. Huge compliance mismatches though, would not be desirable especially due to greater deformations experienced by the arterial walls which affected the centerline velocity.