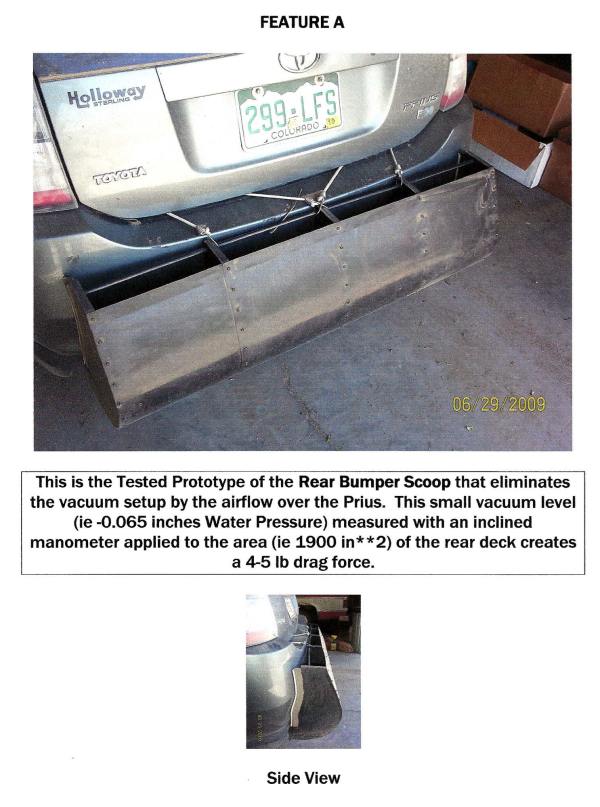 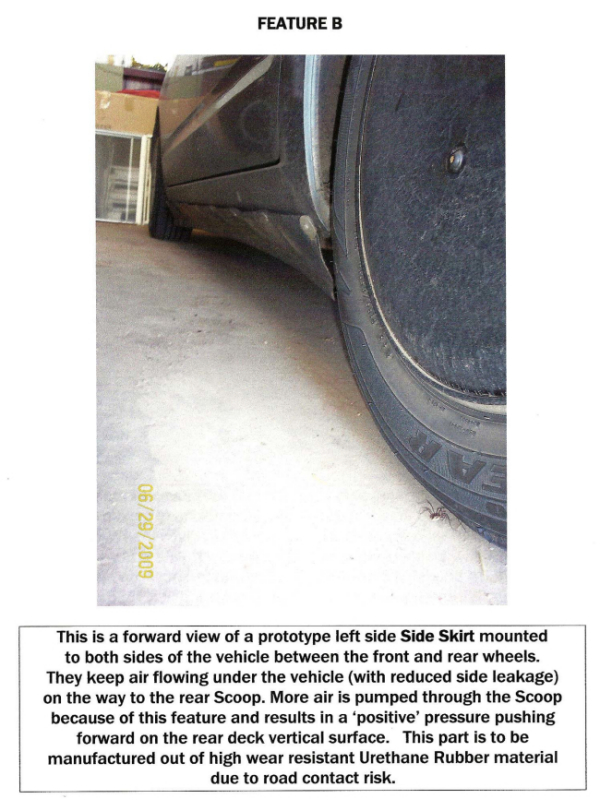 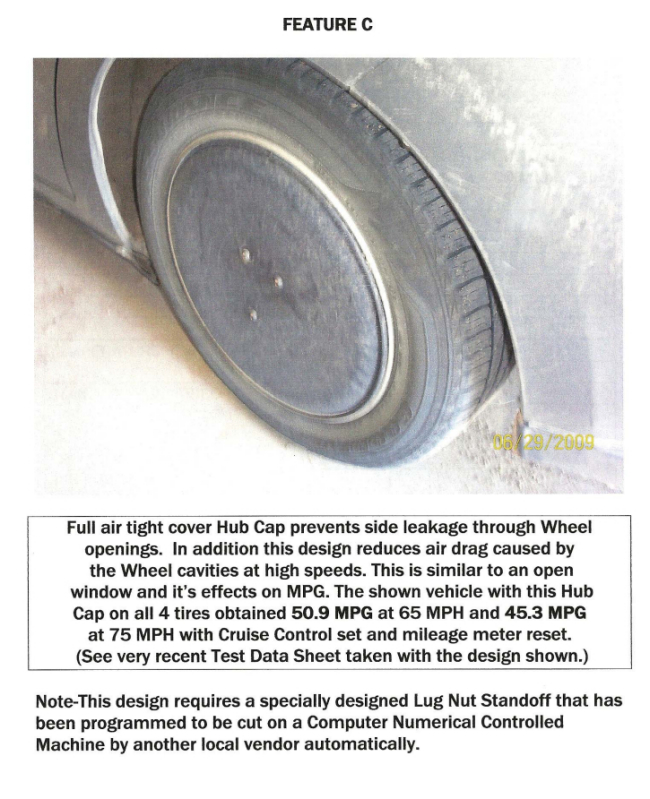 Last year I attempted to enter the ‘X-Prize for a 100 MPG Vehicle contest. I own a Toyota 2005 Prius and have 159,000 miles so far. I love this car. I withdrew from the contest because I could not get 75 MPG after testing 19 or so ideas. 75 MPG was the goal required to enter their preliminary race which is currently planned in California.

Despite what the US Government stated was the mileage (that one would expect for this vehicle in 2005) I kept accurate records and could only get 42 MPG. After testing many ideas on my locally defined test track I obtained 49.1 MPG with the features listed in the Preliminary Patent Application filed with the USPTO.

During the development of this design it was found that a small vacuum existed on the rear end of the vehicle. The rear deck area multiplied by the negative pressure resulted in a 4-5 lb force pulling backwards. By eliminating it completely with the Rear Air Scoop (see Feature A photo) a gain of 4 to 5 MPG was realized. This rear force being pulled at 65 MPH consumes approximately 0.8 HP. This Feature was designed using a personal 3D ACAD system and the detailed parts were produced on a local steel laser cutter, assembled on-site, and painted.

A small vacuum was found to exist at various spots under the vehicle. It was found that the Side Skirts (see Feature B photo) on both sides of the vehicle along with the addition of the Bulging Wheel Covers (see Feature C photo) helped the vehicle obtain higher mileage at highway speed limits. The Skirts were made from plastic garden trim material. The Wheel Covers were made from 16 inch pizza pans. Four additional features were added to improve mileage performance. They are Using 0-15 Synthetic motor oil, Tire pressures set at 40 psig at 50 F, Using a K&N Air Filter, and Installing Air-Tabs ® (creates air flow vortex’s) installed per manufacturer requirements.

The Marketing plan was to develop ‘Kits’ that would fit all Prius vehicles. This is a 1 million car market. The price for the kit would be dependent upon the cost of gasoline and the customer’s annual mileage. You would want the customer to pay-off the system within one year of use. The plan was that the X-Prize contest would provide the marketing advertisement needed. This is not possible at this time. Prius owners are ‘nerds’ who would easily buy this Kit. When this Kit idea takes off then marketing the System to vehicle manufacturers would be the next business goal. Tooling would be built at this time. Getting a 20% improvement in mileage is a valuable gain for any automobile that meets the X-Prize goals for emissions, safety, 2 passengers, and no vehicle reliability risks. There are no moving parts in this system. SUVs and Vans are prime candidates for this System.