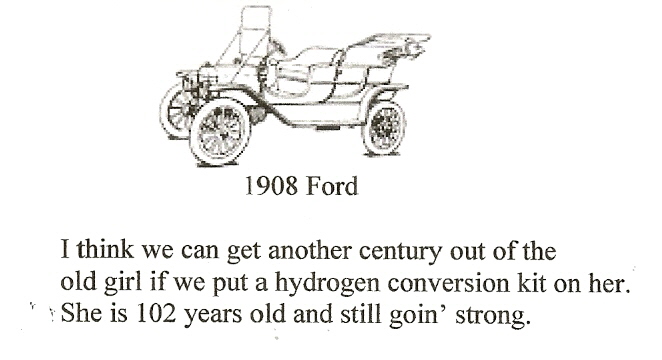 The current internal combustion engine will run on hydrogen with some modifications. One vehicle had a range of 600 miles between the hydrogen tank and 10 gallon regular gas tank. The existing fleet of gasoline vehicles could be converted to run on gasoline or hydrogen for the price of a conversion kit. I have seen numbers of $1,000 to $2,000 for the kit. The vehicles could run on hydrogen and use gasoline to venture beyond hydrogen refueling station range.

Hydrogen fuel conversion could be achieved by picking a medium size town that has a small number of gas stations and a reasonable number of autos. Install a hydrogen station fueling port along side the regular gas pumps. The problem of the chicken or egg is eliminated with the egg (Hydrogen refueling port) coming first.

Gasoline Tax could be used to keep the cost of Hydrogen down to economically viable levels until commercial production levels are reached. Each individual could pay for the auto conversions. A tax credit to convert may also help. As people wear out existing vehicles the energy that went into building the car is conserved and the car has significantly reduced emissions (water vapor). The engine runs cooler on Hydrogen causing the engine to last longer. As replacement vehicles are purchased the people can choose from the available models and manufacturers. Fuel cell costs and problems hopefully will be solved and hydrogen only or hydrogen with a small gasoline tank for venturing outside areas not having hydrogen. Americans are ingenious at coming up with solutions. Maybe a kit to snap on a gas tank for vacations or business trips outside the local area.