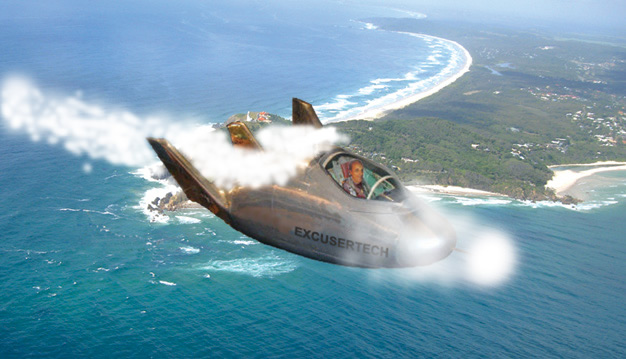 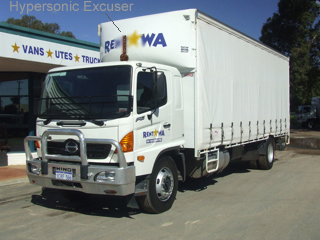 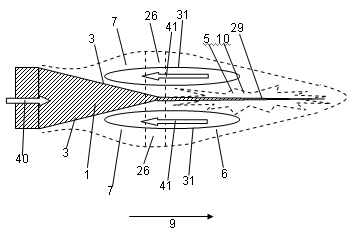 Why struggle through the air when it can be swept out of your way in front of your vehicle? If you have ever driven in the slip stream of a truck you will know you don't need to be so heavy on the gas. About half the propulsion energy of a car is lost in air resistance. For an aircraft the proportion is much higher.

So how does my "excuser" system push the air sideways without putting a truck in the way? It uses a novel approach with a very familiar substance: water.

Water vapor at very high temperature and pressure is created by burning a two-to-one mixture of hydrogen and oxygen in a rocket combustion chamber. The exhaust of the rocket is released out in front of the vehicle and is directed more or less sideways to the direction of travel. Of course it must be done in a balanced manner, for example left and right, up and down, to avoid putting the craft into a spin.

The blast of exhaust water vapor strikes the air molecules and pushes a proportion of them sideways. In place of the air is a plume of expanding and cooling water vapor. At a point in the trailing plume the vapor begins to condense into droplets. This process can happen implosively, resulting in a momentary reduction of gas pressure and density. At that moment the nose of the vehicle enters the plume and experiences reduced aerodynamic drag. This process can be assisted by refrigerating the nose of the vehicle.

The oxygen and hydrogen can be produced by electrolysis of water either in a fixed place or on board the vehicle. Even drag reduction of a few percent will result in savings of tens or hundreds of millions of dollars in fuel and carbon costs across a transport sector.

But allow me to dream of an aircraft with oxy-hydrogen fueled frontal drag reduction, and rear propulsion. A flame-front of burning oxy-hydrogen moves at hypersonic speed, so there is potential for very fast transportation. To complete the picture we could add an Excuser on the upper surface of the aircraft to increase lift. Taking that to the maximum and we could hover too!

But lets start with our feet on the ground. Approximately half the fuel used on the road is used by trucks. Lets put an excuser on the front of a freight truck. Assuming a 2KW "Hypersonic Excuser" creates fuel savings of 5%, the annual fuel savings of a 44 ton articulated vehicle running 70,000 miles a year at 8 mpg, costing US$3 pg, would save US$1300 a year in fuel. The "Hypersonic Excuser" can be a simple add-on kit costing US$900.

No exotic materials are required, and all the equipment required is known technology. The pollution free exhaust gas is water droplets and vapor, and the energy source can be renewable electricity. The technology is fully compatible with future electric transportation, and the speed potential is hypersonic.