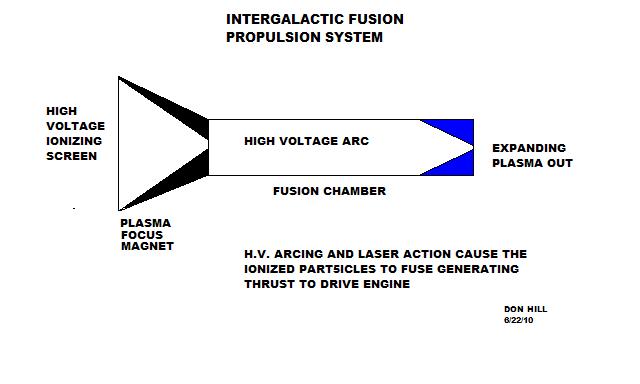 Propelling spaceships through deep space requires ships to carry huge amounts of fuel to escape the gravitational pull on the ship. Once a space ship escapes the pulls of gravity within a solar system, the energy required to control the velocity of the ship becomes extremely small. With no added force, the ship will follow a trajectory of a gravity-controlled arc around nearby bodies and Black Holes at the center of the Universe(s). When energy is applied, the ship will enter a new orbital level much as electrons do when accelerated within an atom. The same basic laws of gravity apply. Study electron flow to gain insight to understanding intergalactic travel possibilities.

Before the beginning of our Universe, all matter was compressed in a black hole by all the forces in the Universe. The BANG shattered it into Planck sized particles dispersing throughout the Universe instantly. In the next few billion years, twenty or thirty percent of these particles fused to produce all visible matter throughout the Universe. Seventy percent remains as invisible, subatomic matter speeding through “empty” space. Most of the rest are Planck sized bits of discrete matter, surrounded by force fields that decrease exponentially to infinity. The smallest part of the Universe is filled with these force fields and the “empty space” between particles varies dependant on the density of matter at that point in space. Every bit of matter is surrounded by appropriate electrical, magnetic, and gravitational fields that extend to and beyond the edge of the universe. While the minimum size of the particle is limited to one Planck, force fields are continuous and have no lower limit.
Energy can be harvested from this unlimited source by forcing fusion reactions. Harnessing this energy is a daunting task that will be solved in the foreseeable future. Magnetic forces are used to successfully contain atomic particles in accelerators. These techniques can be modified to focus the scattered particles of outer space into concentrations that encourage high velocity collisions. High Voltage discharge through particle fields causes increased energy levels to begin a fusion reaction. The generated energy can be used for propulsion in outer space. The fields are constant and unfettered by travel at many times the speed of light.
Bon Voyage