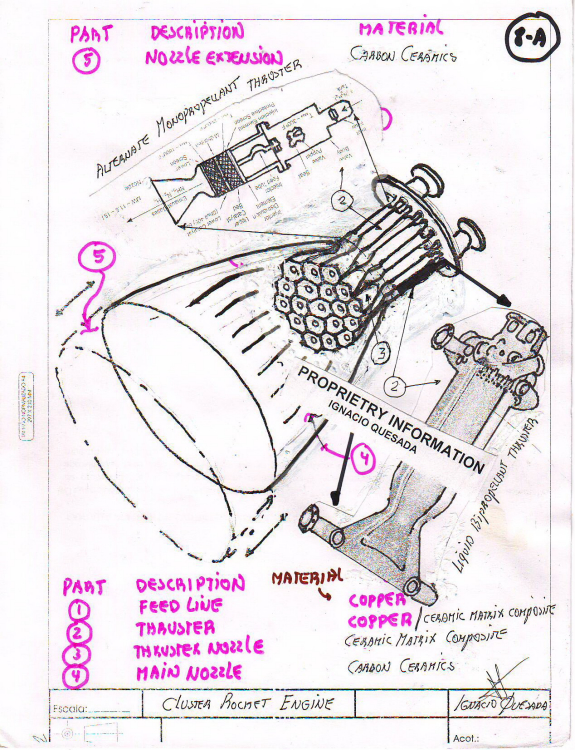 A CLUSTER ROCKET ENGINE:A cluster engine is made up of small, easier to develop and less expensive thrusters that provide the engine with greater thrust and versatility.
Typically, for an engine using a cold gas or a pressure-fed liquid chemical, the thrust chamber pressure is the key to establishing its weight. Increasing the chamber pressure in a thruster design and trade study produces several effects: The thruster will tend to be smaller and perform better because of an increased area ratio and to a much lesser extent, an improved combustion efficiency. This is the main concept of a cluster engine.Therefore, the engine weight and propellant quantity will tend to decrease (40% saving over current engines). Having a required surface area, several thrusters can be clustered in an hexagonal shape pattern in order to increase the total area ratio.There are 19 thrusters put together in the drawing shown.Hexagonal nozzles are used to provide thrust allowing modular nozzles to be clustered with a minimum amount of interstices between adjacent nozzles (aft-facing base area) which otherwise form flow paths for ambient air to be drawn into the flow of combustion products, thereby introducing turbulence into the overall flow stream thrusters.CLUSTER ENGINE ADVANTAGES OVER A SINGLE CHAMBER ROCKET ENGINE.By comparing a regular single chamber rocket engine with the cluster engine, we reach the following conclusions:Thrusters in a cluster engine are arranged in an hexagonal shape to further increase the area ratio requested as for a single chamber engine.The exhaust gases in a cluster engine continue expanding after leaving the first set of primary hexagonal nozzles. As they expand into the main nozzle, they provide a 16 % increase in thrust and specific impulse and a 6% reduction in propellant volume flow rate per second when compared with a single chamber engine of its size.The cluster engine is made up of small, easier to develop and less expensive thrusters (modular combustion chambers) that provide the engine with a greater versatility instead of a single chamber which is more expensive to make.Thrust vectoring: Since the thrusters in a cluster engine can be controlled individually, a land or flight vehicle can be maneuvered using differential thrust vectoring once the main nozzle is under-extended and
exposing the thruster nozzles. This eliminates the need for the heavy gimbals and actuators used to vary the direction of traditional single chamber engine nozzles.Since modular thrusters and a main bell shaped nozzle are used in a cluster engine, this makes the engine to be very light in weight as compared to a single chamber engine and for which a reduction in overall weight for a land or space flight vehicle can be achieved.There are no far greater heat fluxes experimented in a cluster engine than the ones experimented in a single chamber engine.The cost of manufacturing all the individual thrusters and a main nozzle in a cluster engine is cheaper than manufacturing a single chamber engine.