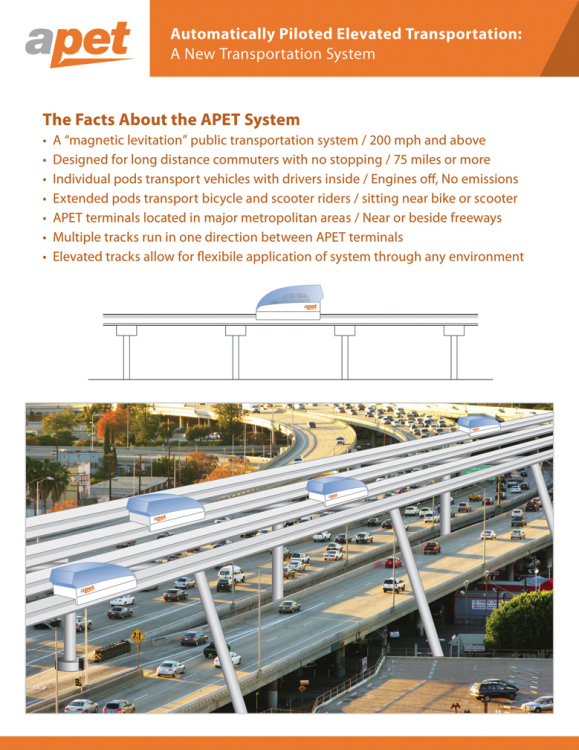 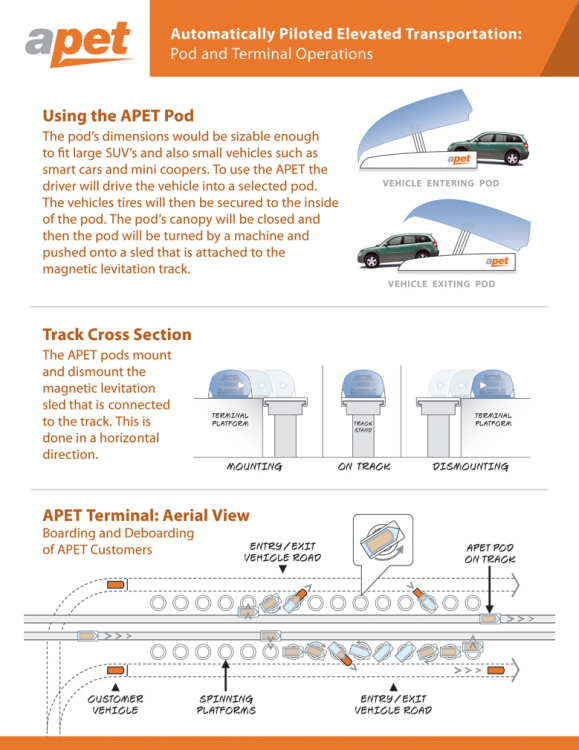 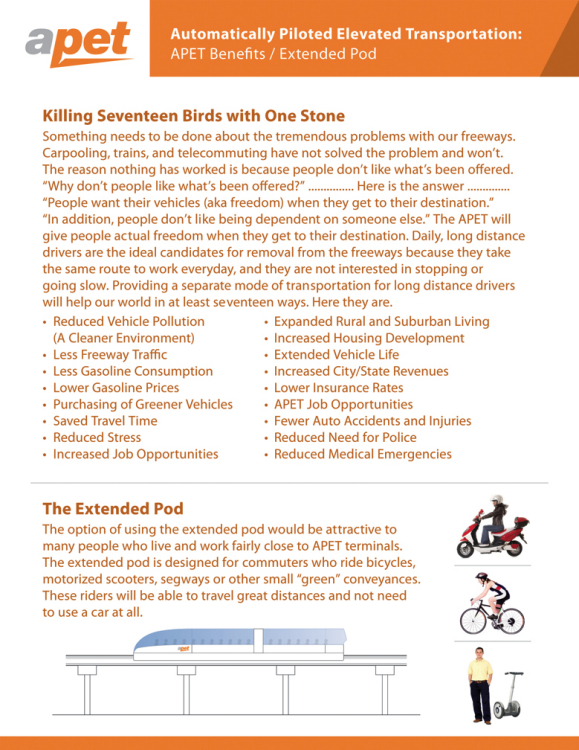 The APET is a “magnetic levitation” public transportation system. It will transport commuters and their vehicles, via individual “pods,” long distances, to and from major cities, while their vehicles engines are off and expelling no emissions. This transportation system will radically lower the number of vehicles on freeways, thereby reducing vehicle pollution and traffic. In addition, the APET system would service bicycle and scooter riders. They would travel in an extended pod that would carry three dozen or more people and their bicycles or scooters. Obviously, a fee will be assessed to use the APET system. To pronounce the name APET, say the letter “A” and then say the word “Pet.”

DESCRIPTION:
The APET system would consist of terminals located in major metropolitan cities (e.g. Los Angeles, Anaheim, San Bernardino, San Diego and Las Vegas), which would be connected by a series of maglev tracks, on which the individual pods would travel. The terminals would be structures located above or beside freeways. The maglev tracks would primarily run above or near freeways, but where feasible, they would take more direct routes to target cities. The APET system could be installed in almost any region in the world.

USING THE APET:
The users of the APET system would drive their vehicles into a pod which would then be mechanically pushed and locked onto a sled already connected to the maglev track. The “pods” would be able to safely travel at 200 mph and above. The ideal users of this transportation system will be commuters who live within 20 miles of an APET terminal and whose destination is near another APET ternimal. A one-way trip of 75 miles using the APET would take approximately 20 minutes. In comparison, driving 75 miles in a car, on the freeway, at 60 mph, takes 1 hour and 15 minutes if there is no traffic. With traffic, driving 75 miles could take over 2 hours and 30 minutes.

This transportation system would be powered by electricity from multiple sources such as solar, conventional, or from wind power produced by wind turbines designed into the maglev tracks. The turbines would harness the winds created from the APET pods traveling by and the local winds.

MARKET POTENTIAL, COST COMPARISON, AND MANUFACTURING:
The market potential of the APET system is great. Califorina State Route 73 is a freeway 18 miles long and cost $800 million. In my estimation, the APET system would require less material and fewer personnel resulting in lower costs. The APET would be manufactured in sections at offsite locations, and then delivered and installed onsite.