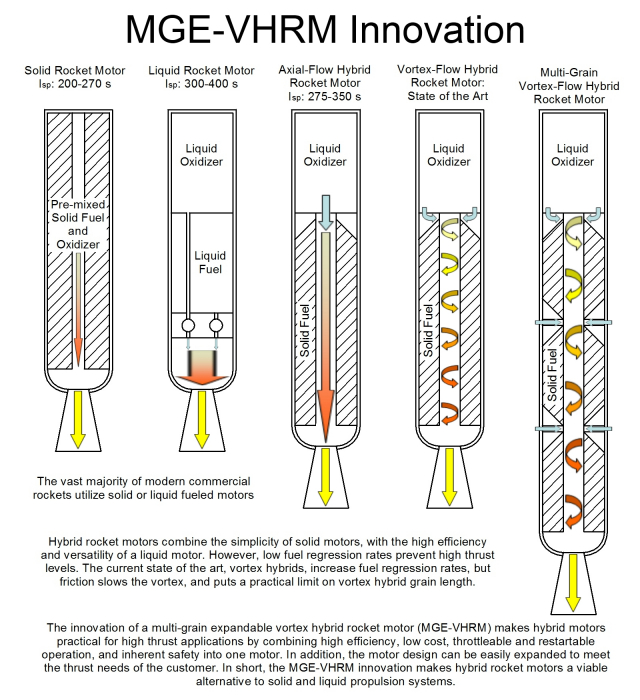 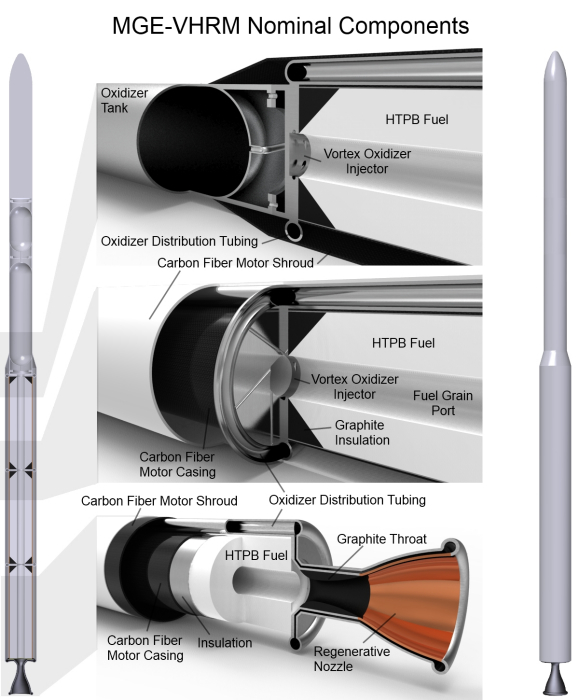 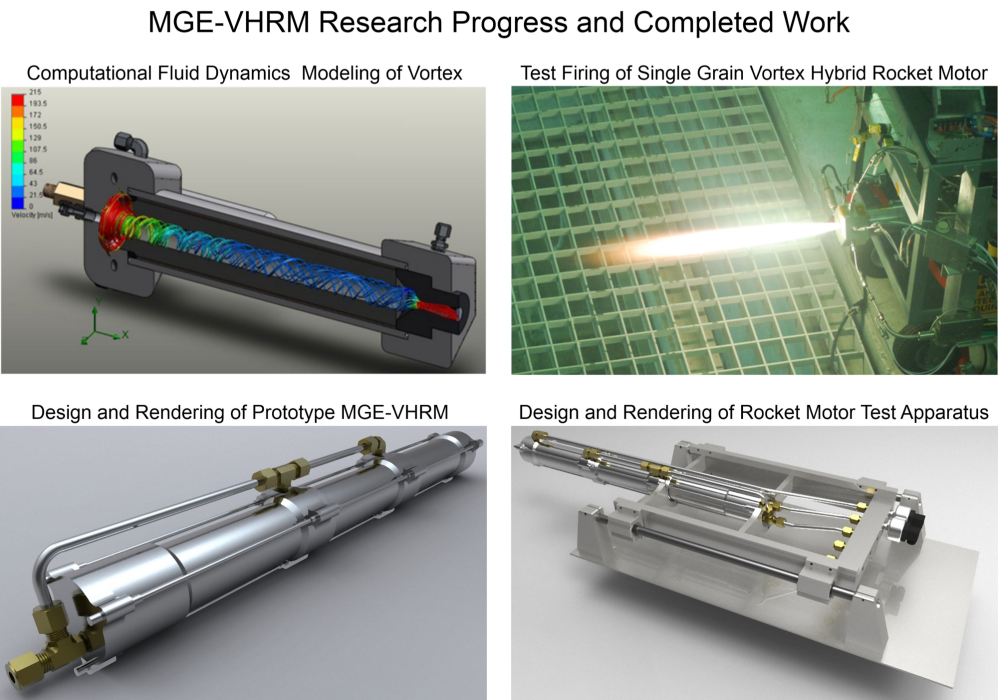 Space flight, satellite communication, and global navigation have become ubiquitous parts of our lives. The uses for space technology grow with each passing day, and there is a pressing need to continuously innovate the ways in which we access space. Typically orbit is reached using solid or liquid rocket motors; however, a combination of these two technologies, a "hybrid" motor shows great promise. The development of hybrids is a subject of increasing interest for any industry needing safe, high thrust rockets. Because of their inherent safety, reliability, and environmental friendliness, hybrid motors are receiving more attention from government, industry, and the research community. The Multi-Grain Expandable Vortex Hybrid Rocket Motor (MGE-VHRM) concept promises to bring hybrid motors to maturity and offers an alternative to the risks and penalties associated with solid and liquid rocket motors.
In a hybrid rocket motor, fuel is stored as a solid grain and combusted with a liquid oxidizer to produce thrust. Typical hybrid fuels burn too slowly to produce useful amounts of thrust. This leads to multi-port fuel designs with higher surface area but weaker construction, poor volumetric loading of the combustion chamber, and higher weight. Vortex hybrid motors represent the current state of the art. In this configuration, oxidizer swirls at high speed through a single port in the center of the fuel grain, drastically increasing fuel burn speed and thrust. However, friction limits the ability of the vortex to travel down the full length of the motor, limiting their size. The MGE-VHRM design addresses the limitations on hybrid motor thrust, while maintaining the versatility, reliability, efficiency, low weight, simplicity, low cost, and inherent safety that hybrids afford.
The MGE-VHRM design works by injecting oxidizer in multiple locations down the length of the fuel grain. As shown in the diagrams, oxidizer is injected tangent to the surface of the fuel port and perpendicular to the main motor axis, resulting in a swirling vortex. Multiple axial injection locations maintain vortex intensity throughout the combustion chamber increasing fuel regression rate, fuel/oxidizer mixing, and combustion efficiency. The expandable nature of this motor design allows manufacturers to increase thrust by adding another injector and fuel grain, rather than redesigning an all new motor.
This innovation is exciting because hybrid rockets offer huge benefits. They are throttle-able, restart-able, more efficient, cleaner, and safer to operate than solid fueled motors while being simpler, cheaper to manufacture, easier to store, and only slightly less efficient than liquid rocket motors. Because combustion is constrained to the interior of the fuel grain, only the nozzle needs to be insulated against high temperatures. For this reason, composites such as carbon fiber could be used for the casing rather than heavier metals. The benign nature of hybrid fuels allows simple fuel-grain casting without special precautions. Altogether, these innovations make hybrids less expensive than a comparable solid or liquid motor.
With increased emphasis on costs, safety, performance, and environmental impact, the MGE-VHRM concept offers an attractive alternative to conventional solid and liquid fueled rocket motors.