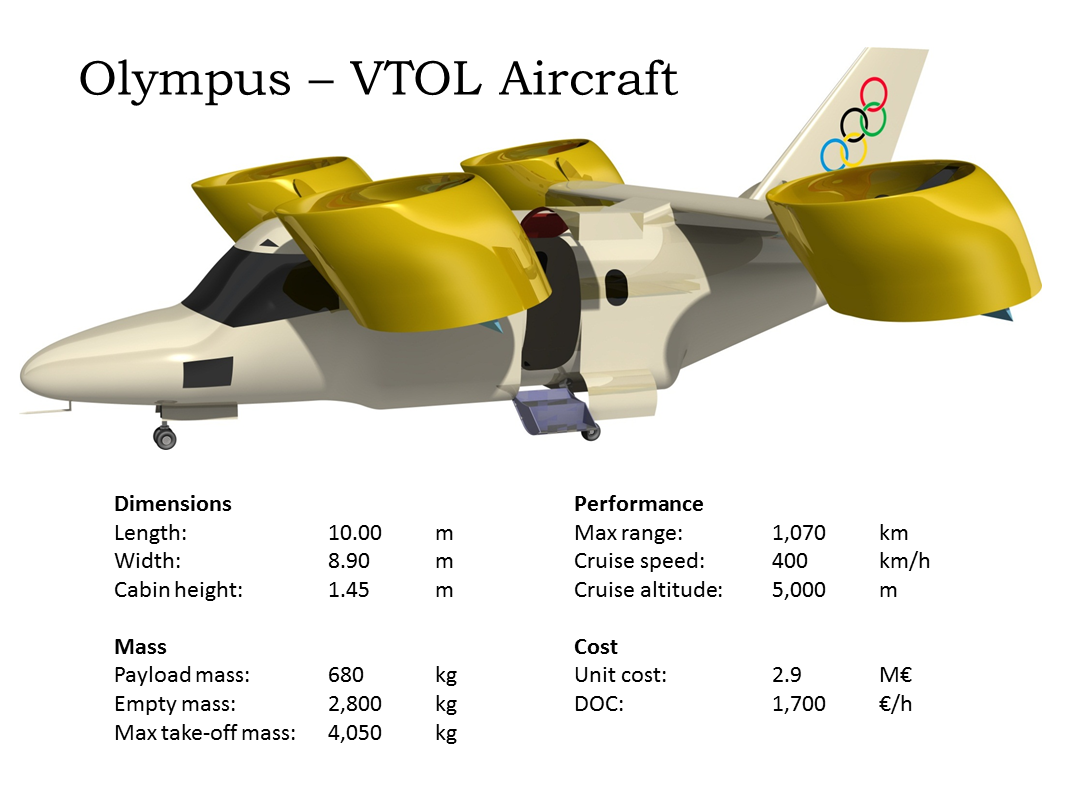 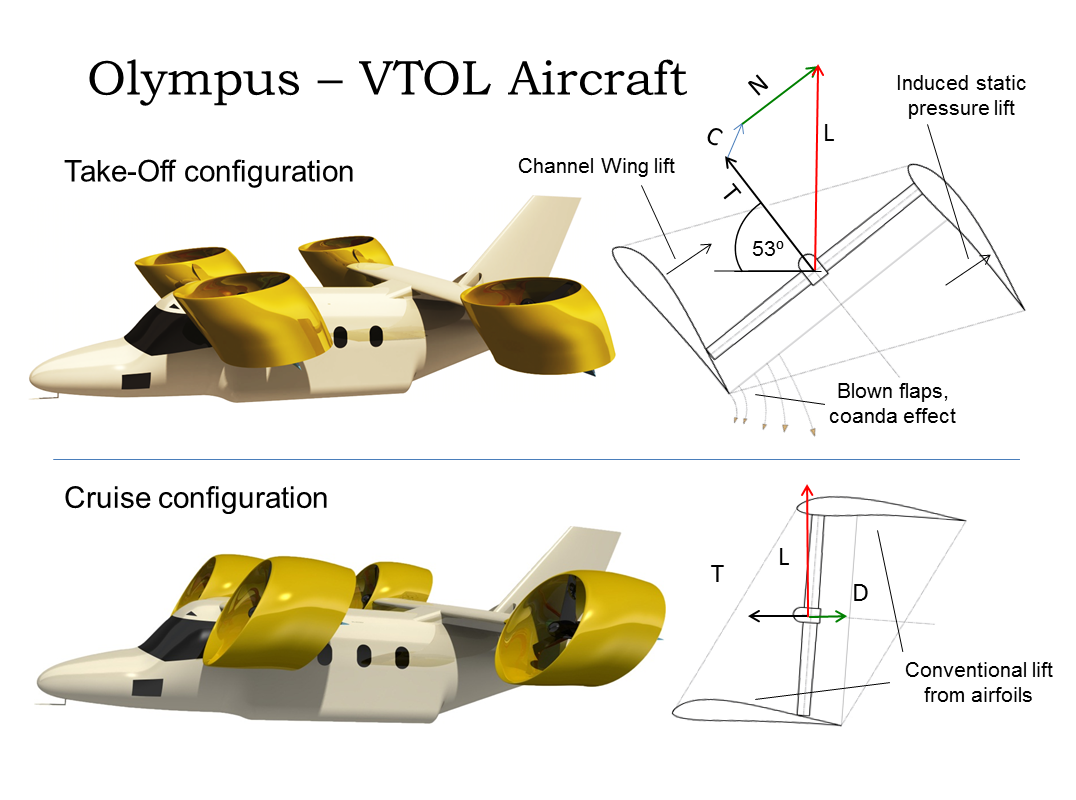 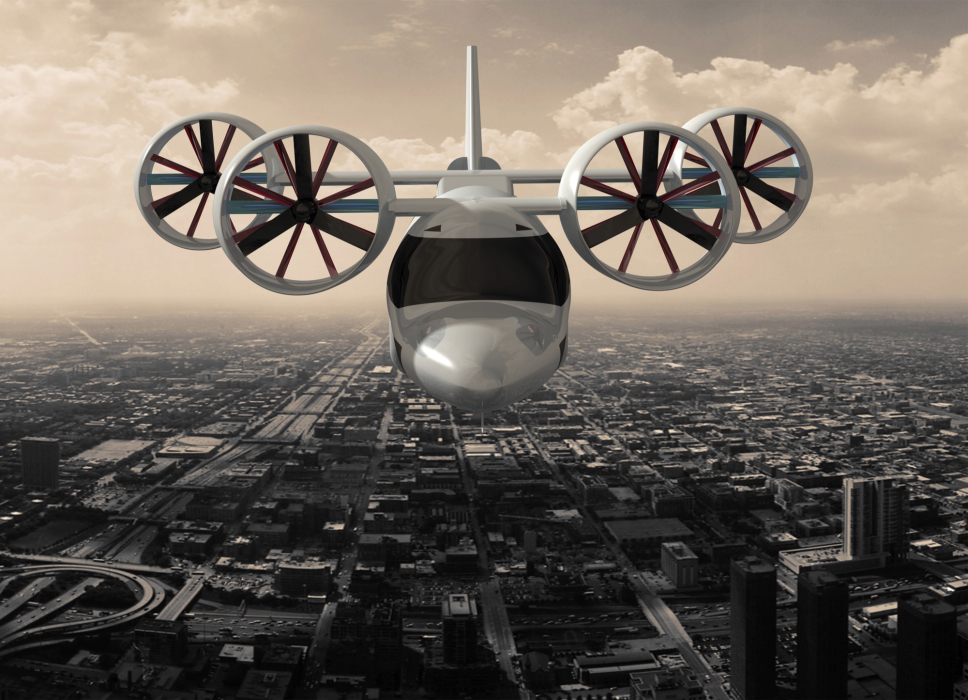 The Olympus is a four passenger business aircraft capable of performing point-to-point (PtP) vertical take-off and landing (VTOL) air transportation whilst outperforming state-off-the-art helicopters on speed, range and noise emissions. The aircraft features a balanced combination of conventional aerospace techniques with several unique innovations, allowing for certification and a first flight in 2025.

In current day business aviation and special operations such as Search & Rescue (SAR) and MedEvac, a combination of helicopters and airplanes are used. Helicopters provide access to almost any location, but lack speed and range and produce a lot of noise (> 80 dB at 100 m, which is likely to prevent them from operating in urban areas in the future). Airplanes are bound to runways and therefore need to be supported by other means of transport, which costs time and money.

Market research showes that 75% of business flights are below 1000 km (11% is above 2000 km, a region where PtP does not provide significant advantages). Helicopters can fly at cruise speeds of approximately 200 km/h and have a range of 700 km.

With its ability to perform VTOL like a helicopter and on helipads, a range of 1000 km, a cruise speed of 400 km/h and noise emissions of approximately 72 dB (noise level perceived from normal speech) at 100 m, the Olympus provides a special niche that combines the best of helicopters and airplanes into one aircraft, at a unit cost below $4 M. A combination of one helicopter and one airplane will cost approximately $3 M with far higher operating and maintenance costs.

The design comprises some novel concepts. First, in order to perform VTOL, the aircraft will use tilting ducted fans to generate lift during vertical and cruise flight, at reduced power requirements. The ducts are innovative and unique annular wings combining several aerodynamic contributions (coanda effect, blown flaps, induced static pressure lift and channel wing lift) to generate lift at zero airspeed through the induced velocity of the fans. See pictures for a cross-section of a duct.

Second, the aircraft was designed for electrically driven fans and all electric secondary power systems in order to reduce weight, increase efficiency and to allow for easy replacement of the engines by hydrogen fuel cells. Two turbine engines of approximately 650 kW are used to power the generators that provide electric power to all propulsion systems, flight controls, tilting mechanisms and avionics. Some of this is also partly applied in the 787 and A380.

Third, significant noise mitigation has been achieved by burying the turbine engines within the fuselage and by applying noise shielding. The ducted fans produce far less noise compared to helicopter rotors.

Production can be based on current production techniques and material choices, therefore allowing for similar production as current aircraft.

The aircraft will comply with EASA CS23 and CS29 regulations in Europe.

The Olympus was designed as part of the 2010 bachelor project at the faculty of Aerospace Engineering of the Delft University of Technology, the Netherlands.