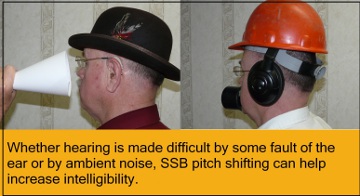 The most common deafness manifests as a diminished ability of the ear to detect certain tones and to separate some tones from others. The difficult tones are usually in the higher pitches. Conventional hearing aids only address problems of loudness at critical frequencies and cannot shift the pitches of sounds to frequencies that the faulted ear can use. If the brain does not retrieve words at acceptable pitches often enough, it forgets how to decode those words.

Early radio researchers developed Continuous Wave Modulation and Amplitude Modulation. A third invention, the less known Single Sideband Modulation can shift audible frequencies away from their original frequencies. Middle “C” on your piano might become “C-sharp” or “G” or it could appear octaves away.

Single Sideband technology will help the deaf and those working in high noise environments. SSB, as it is called, can shift the pitch of any audible sound to any other pitch. It does this without latency.

Imagine Grandpa with hearing aids turned up, struggling to understand three-year-old Marybelle. The pitch of her voice is too squeaky and high. With SSB technology in hearing aids you can make her voice drop down deep to sound like Hoyt Axton. Now she's in Grandpa's range.

Imagine miners and airport personnel trying to protect ears with plugs and muffs while trying to communicate via radio over the screams of fans and aircraft. With SSB technology you will shift the pitches of voices and attenuate or phase out those noises that are specific to rapidly moving air.

I propose to take microphone audio and limit (compress) its peak loudness. The circuitry will then modulate a radio frequency with the carrier and one sideband suppressed (SSB). That SSB modulation will be “beat frequency” heterodyned against another radio frequency to be recovered in a new audio frequency range and driven through conventional hearing aid filter circuitry to the ear canal.

In SSB hearing aids, unprocessed ambient sound will be admitted to the ear canal along with the shifted audio. Therefore, the modulating frequency and the beat frequency must each be tightly controlled so that the newly derived tones will be even divisions (or multiples) of the originals. In this manner, original and new tones are meshed without confusion to the listener.

Some six to seven-million hearing aids are sold yearly in the US. The SSB feature can be turned on and off as needed leaving ordinary filtered amplification constantly available. That means that the SSB hearing aid is appropriate to most users. It is reasonable to expect that this technology will be made available in every aid sold.