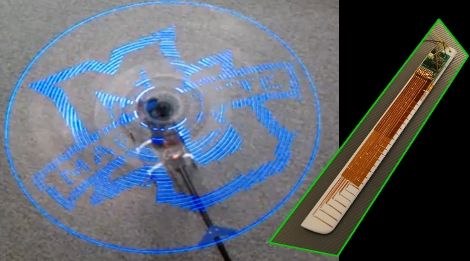 My main aim was to have a project that has an equal involvement of hardware and software. Also we decided to take up a project that is visually appealing and ended up concentrating on the latest display technologies. Finally we decided to do the project on persistence of vision (POV) displays. The display will be able to show text messages, numbers, patterns, etc.

Principle: POV stands for persistence of vision. It is a term that has been adopted while considering devices that rely on the eye's tendency to continue to "see" an image for a short time after it has disappeared. Persistence of vision is the phenomenon of the eye by which an after image is thought to persist for approximately one twenty-fifth of a second on the retina.

Technical details: Based on the above principle, we have decided to build a project which aims at rotating a single 1 dimensional array of LEDs with the help of a DC motor and switching the LEDs on and off in such a manner that we get a meaningful display virtually in 2 dimensions. The switching of LEDs can be controlled by using a suitable microcontroller and associated current control circuitry. We should monitor the speed of the motor and synchronize it to the desired speed in such a way that the speed is appropriate enough to produce the required virtual image effect.

Innovativeness & usefulness: Although the project has been made by others, there is always some innovations to be put into it in terms of hardware or software which make it different from others. We are also trying to put very unique innovations which will make it exceptional. POV display has many uses associated with it. It can be used for advertisements where the messages can be changed every time you require. 2. clocks ( digital or conventional). 3. very easy to use displays.

Future aspects:- POV display can be used where it is required to produce various visual effects. Since it is impossible to recognize that it is the same LED arrays which are rotating, this device may be an addition to modern day display electronics and find use in display applications. Being a display device, its application and uses are never going to end.

Working: The helicopter has two blades and each has the same hardware on them and gobbled up about ten hours of assembly time each. We basically built a printed circuit board using the blades as a substrate by attaching adhesive copper foil. This makes up the matrix for the LEDs and connects to a small circuit board with an ATmega8 and some shift registers mounted on the inside end of the blade. There’s also a 180 mAh LiPo battery pack, and a hall effect sensor to synchronize the display on each. The results are spectacular, as you can see in the video after the break, but there’s a few bugs left to work out in order to fully tame the 32 LEDs on each rotor.