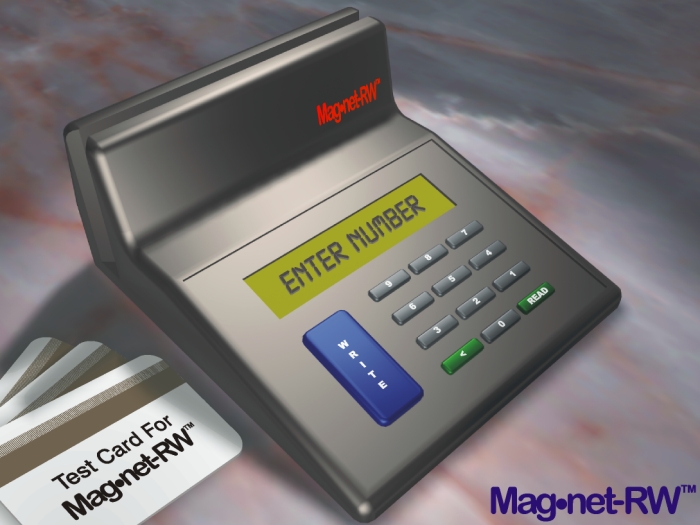 This invention is a portable magnetic strip writer and reader. This device allows the user to "swipe" a magnetic card manually for both writing and reading magnetic information to or from a card with a magnet strip and a series of closely spaced printed optical bars. The optical strip may be printed in standard ink, UV ink, or even the magnetic material of the magnetic strip itself.

Because there are no moving parts (except the card itself) required for the writing and reading components, the device can be made smaller, cheaper and use less power than traditional card writing devices. This allows it to be small enough to be attached to portable devices such as smart phones or PDAs

The first diagram shows how the device works when attached to a smart phone. The smart phone would be used for the data entry, either manually or automatically. The phone would also serve as the control for the device.

The second picture is a rendering of a stand-alone device. This device would be used on a desktop. The data would be entered either manually or automatically via a keyboard or attached computer.

The last image is the patent describing a "pen" or wand embodiment. This version would be drawn across the card using the edge as a guide. The card would be written on the first pass and read on a second pass to verify the data was written correctly.

This device would have many uses such as inventory control, access control, routing information, or password storage. Because the user cannot easily read or change the information, the card could be used for sensitive data recording or transmission.

This idea is covered under patent No. 6053415 and is available for licensing. Contact norwooddesigns.com.