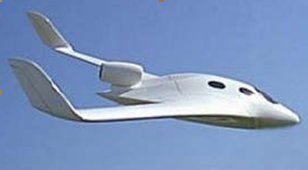 Offering an ultra-low manufacturing cost and virtually maintenance free, MAJX has the potential to radically alter the economics of the emerging personal jet marketplace, and confer revolutionary cost effectiveness for military flight applications. Operable on Jet-A, JP-5/8, 100LL Avgas, Gasoline, LNG/LPG, or Alcohol, the lightweight MAJX propulsion system is ideal for UAV/RPV applications, and is inexpensive enough to be considered 'disposable' for use in flying ordinance.

The MAJX-350 exhibits complete form factor compatibility with conventional turbojets, the first valveless pulsejet having an in-line geometry, which makes this possible. Delivering 350 lbs of thrust, the engine is also equipped with a solid state ThermoVoltaic energy converter, designed to generate 5kW of DC electric power from the infrared radiation emitted by the engine as a consequence of its normal operation.

The pictures shown here demonstrate possible layouts of a valveless pulsejet engine. It has a chamber with two tubular ports of unequal length and diameter. The port on the right, curved backwards, is the intake pipe. The bigger, flared one on the left is the exhaust, or tailpipe. In some other engines, it is the exhaust pipe that is bent into the U-shape, but the important thing is that the ends of both ports point in the same direction.

When the fuel-air mixture combusts in the chamber, the process generates a great amount of hot gas very quickly. This happens so fast that it resembles an explosion. The immediate, explosive rise in internal pressure first compresses the gas inside and then pushes it forcefully out of the chamber.

Two powerful spurts of hot expanding gas are created - a big one that blows through the tailpipe and a smaller one blowing through the intake. Leaving the engine, the two jets exert a pulse of thrust - they push the engine in the opposite direction.

What originally attracted and excited the researchers and developers most of all about the pulsejet engine was a peculiar property of pulsating combustion - it can be self-compressing. It burns intermittently, in a quick succession of explosive pulses. In each pulse, the gaseous products of combustion are generated too fast to escape from the combustor at once, which increases combustion efficiency.

The pulsejet is the only jet engine combustor that shows a net pressure gain between the intake and the exhaust. Others have to have their highest pressure created at the intake end of the chamber. From there, pressure falls off. Such a decreasing pressure gradient serves to prevent the hot gas generated in the combustor from forcing its way out through the intake. This way, the gas moves only towards the exhaust nozzle in which pressure is converted to speed.