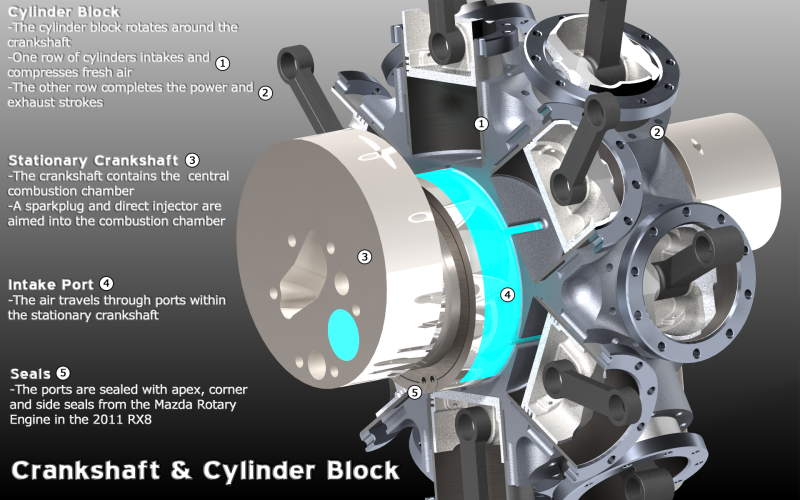 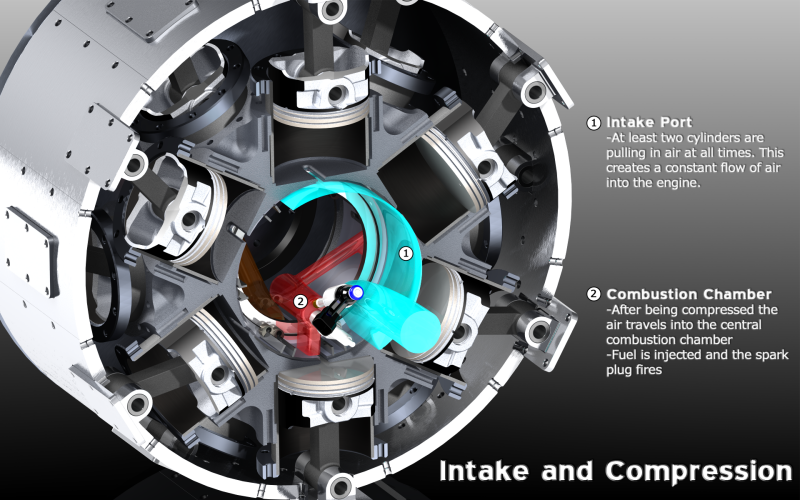 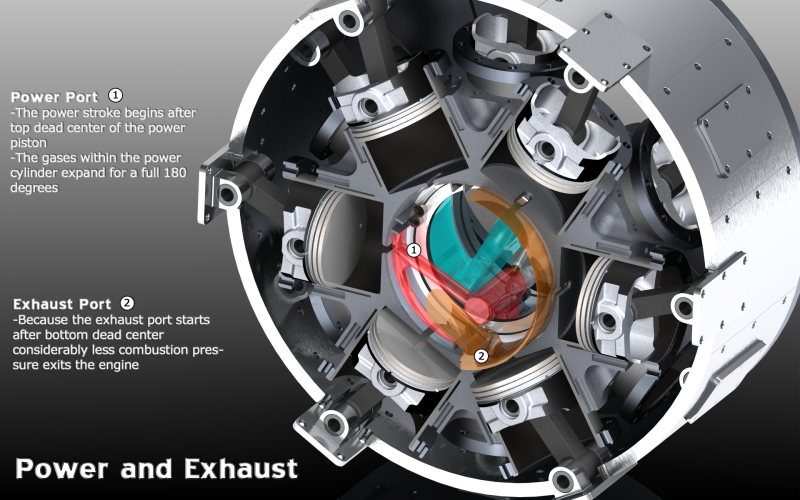 The design of conventional Otto-cycle engines (automotive and beyond) has changed dramatically over the last 100 years. There have been leaps in efficiency but with each advancement it has become harder to improve upon the platform. Instead of making small gains by tweaking the individual components, it is time to change the conventional engine at its core. The Doyle Rotary Engine could be the new platform that is needed. When designing the DRE, the goal was to make the conventional engine more efficient, less complex, lighter and easier to manufacture, while not inventing and adding untested and unproven components to the mix.

The Doyle Cycle: The engine contains two banks of cylinders revolving around a stationary crankshaft. Via ports within the crankshaft, cylinders in the first bank pull in and compress air. The compressed air travels into a central combustion chamber located in the crankshaft. Here fuel is injected and a spark plug ignites the mixture. After the fuel has been allowed to burn, the power stroke begins as the rapidly expanding gases are opened to the power piston. The power piston is forced down and torque is generated as the connecting rod forces against the outer housing. After the power piston reaches BDC, the exhaust port releases the spent gases. The four stokes of the cycle are then complete.

Engine inventors usually take the already complicated orchestra of moving parts within a conventional engine and add even more parts in order to modify the engine to fit their ideas. The DRE has actually simplified the orchestra while using components that have been used in production vehicles for decades. This is very important because using off-the-shelf parts makes the DRE easier to adopt than other concepts and more reliable.

The DRE has a much higher displacement density than conventional engines because the cylinders are meshed together in a radially symmetric pattern. This means that the DRE takes up considerably less space than a conventional engine of the same displacement. And due to the cylinders being arranged symmetrically, no dead weight has to be added to balance the engine. The rotating mass of the DRE is 25% lighter and the overall weight is up to 50% lighter than the weight of an engine of the same displacement.

Instead of a valve-train, the DRE uses Mazda apex, corner and side seals (from the 2011 Mazda RX8) to separate the ports. Eliminating the valve-train not only makes the engine lighter and less complicated (and less prone to failures) but it also increases the efficiency of the ports. This is because unlike a valve, a port opens and closes instantly (providing peak flow for a longer duration).

The DRE will not only be more efficient but also easier and cheaper to manufacture. The cost of developing, manufacturing and assembling the valve-train will be removed. The tight arrangement of the DRE requires less material leading to a lower material cost. The production costs would be much lower than for today's engines.