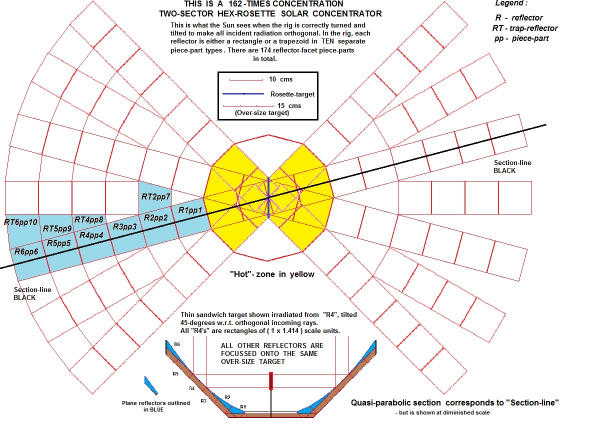 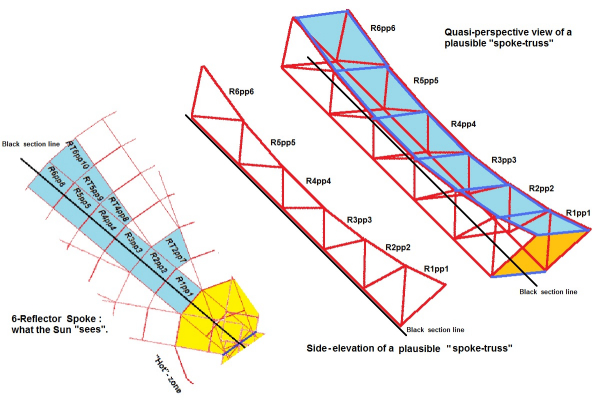 Units of “solar radiation concentrators” of this design are maintained in an orthogonal attitude vis-a-vis incident sunshine - by conventional technical means.

The plane-wave solar radiation that enters a unit's capture-window sees (due to optical for-shortening), a pattern of squares and trapezoids, disposed as a “hex-rosette” as per illustration H#1. Instead of a 360-degree circle, the proposed design of concentrator consists of two equal and opposite sectors of the rosette, each of 105 degrees. It then becomes feasible to design a two-sided rectangular “target of concentration” and to illuminate each side of that target with the concentrated radiation from all the focus-tilted reflectors of one “facing sector”.

There are 66 “seen-as-square” reflectors in each sector : a nominal 66-times concentration. There are also a number of “seen-as-trapezoid” reflectors, with an area-equivalent of approximately 15 additional squares, resulting in a nominal 81-times concentration onto each face of the two-faced target. The rectangular target will actually be built as a flat “volume container”, having two equal and opposite rectangular faces, separated by a thin layer of “material volume” of working fluid. The target-rectangle dimensions will be set over-size to compensate for any alignment errors.

World-wide records affirm that ONE square meter of sun-illuminated area orthogonal to strong sunshine receives ONE thermal kilowatt of solar radiation, therefore : 225 ccs. of targeted water receive 1.62 thermal kilowatts. In the proposed implementation, the target acts as a “boiler” and the water is to be turned into steam.

The 2-sector “hex-rosette” is actually a projection of the real pattern of permanently-tilted reflector-rectangles and reflector-trapezoids of an actual concentrator lattice-frame. It is the basic innovation in this concentrator-design that all the real reflectors are plane (not parabolically curved,) rectangles or trapezoids, rigidly clamped together to make sections of a facetted parabola. The individual dimensions of the reflector piece-parts are derived using geometrical optics, and the “schema” of a single “spoke-truss” is shown in illustration (H#2). Plane-sheet reflector material – like Al-foil, stainless-steel or mirror-finish plastic – can be easily bought from suppliers, at a negotiable cost per square-meter. Individual craftspeople or manufacturing “engineers” are fully capable of treating the information given here like a published “patent” , but can produce an “own-design” version without fear of infringement.

To complete this project, two concentrator sectors are planned, illuminating a concentration-doubling “thin-sandwich boiler” and continuous replenishment supply of water. The average rate of steam generation will be monitored over several “working days”. The design can be scaled-up !