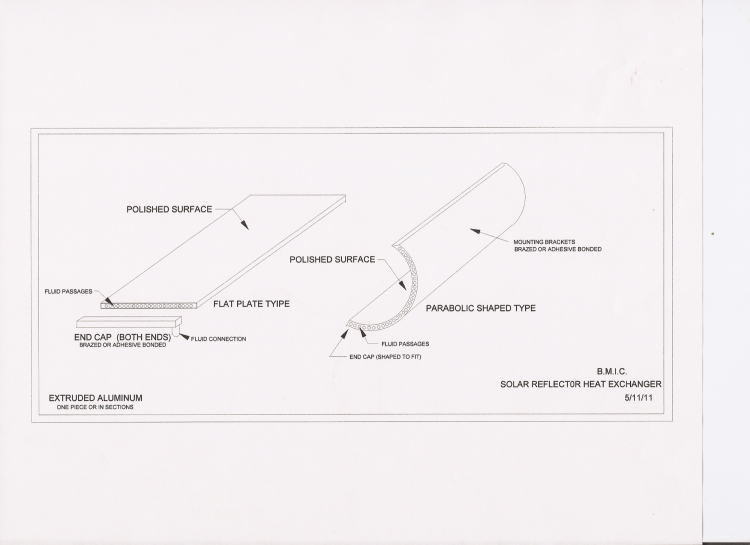 The attempts to capture Solar Energy have resulted in a large number of devices to obtain this. One of the most interesting is a Solar Farm that consists of a large number of solar reflectors that concentrate the sun's energy on a focus point at the top of a tower. The collector, or boiler, heats a solution that provides power to a turbine that generates electricity. The reflectors, usually a flat plate, are arranged to captue the sun's rays as it passes by the farm.

In the process of reflecting the sun's rays, the reflector plates absorb some energy resulting in a temperature rise of the plate. Since the collector farm usually has hundrets of units, the amount of heat absorbed by the plates can be significant which is presently not being utilized. As a result, the following concepts are submitted.

Concept #1. Bond a series of flattened aluminum tubes to the rear of the reflector to transfer the heat absorbed by the plate. The solution for cooling the plate can be directed towards that which is being heated by the tower. This should add to the total energy of the system.

Concept #2. Design a reflector that consists of a series of extruded aluminum tubes. One side of the tube can be polished to produce a reflective surface. The ends of the aluminum extrusion, or seperate tubes, can be capped to produce a flow circuit through which the coolant can be directed. Since the extrusion is a single unit, the heat transfer can be more efficient. The flat plate can also be used as a water heater similar to present units.

Concept #3. Design an aluminum extruded unit which, as mentioned in Concept #2, can be formed into a parabolic shape to produce a concentrated focus for solution heating as well as utilizing the heat energy absorbed by the fluid flowing through the tubes.

It is important to mention that the flat plate unit can also be made with an anodized surface for the purpose of absorbing energy as in present flat plate units used for heating a fluid.