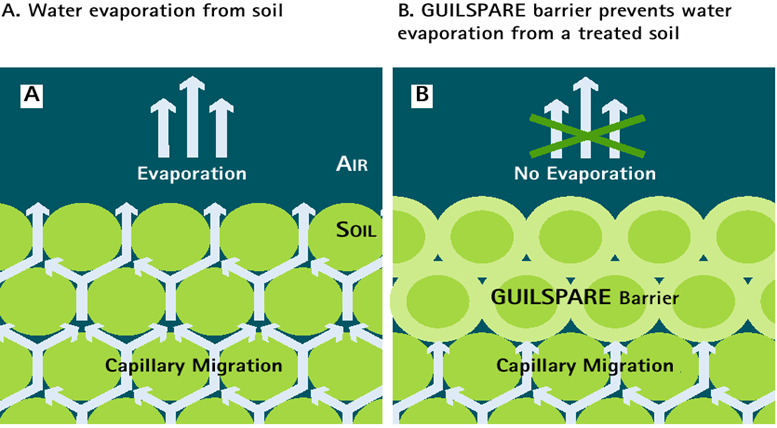 Most countries face a very severe water supply problem, which has already become a food supply problem (which could unfortunately lead to wars and conflicts).

We acquired the original application patent from Nestlé R&D and further patented the first auto degradable liquid mulch for the agriculture in areas suffering from water scarcity.

Guilspare is a liquid organic polymer that you mix at 1 to 2% concentration to water for its first application on soil with a drip-line irrigation process, after sowing (treatment lasts 3 years, if land is not ploughed).

Like GoreTex but upside down, and after a few hours, Guilspare creates an invisible film by coating soil particles, which will prevent:
- water from evaporation, reducing the water use in irrigation by 25% to
50%,
- airborne seeds from growing (reducing herbicides use),
while allowing:
- gas exchange,
- irrigation water and rain to get in the land (gravitation forces being much stronger than capillarity ones),
- 10 to 30% minimum production yield increase.

By-products cannot migrate to groundwater since the organic polymer instantly polymerizes when in contact with air, coating each soil particle to prevent evaporation from taking place. After two to three years it degrades and reverts to sand particle (equivalent dose of one tea spoon per 10 square feet): both EU and US Non Toxicity Reports are available upon request and signature of a standard bilateral NDA.

For further commercial and scientific information, please take a look at www.guilspare.com (UK version) and click on references to download them.

Guilford Holding has been formed on Dec 13th 2010. Demonstration sites have been put in place in Morocco, Peru last month, while a site in China is due by end 2011.

Our model is to package and ship the concentrate (Coca Cola model) to importers or to Guilford branches overseas.