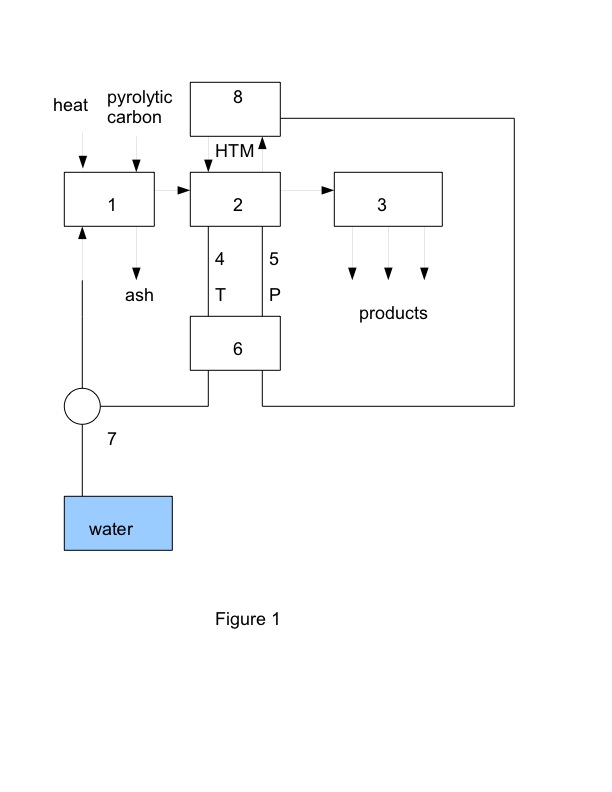 The Sun would be sufficient to supply all of our energy needs, but solar energy is not available during the nighttime and on cloudy days. That is why it would be advantageous to convert solar energy into storable and transportable chemical fuels. Global reserves of oil and natural gas are decreasing so it is another reason why the energy conversion is necessary. Recent oil price increases have led to considerable interest in making synthetic fuels.

Basic principle of the system is shown in Fig. 1. Concave mirror (parabolic reflector, in the figure represented as heat) which turns so as to keep reflecting sunlight toward a receiver (1) positioned at the reflector's focal point. The receiver consists of steam generator and chemical reactor. In the reactor are carbon particles which react with overheated steam, hydrogen and carbon monoxide are main products of the reaction.

Hydrogen, carbon monoxide and catalyst in vector channel reactor (2) produce a mixture of hydrocarbons, which are sorted out in the refining stage (3). Pressure and temperature needed for production of higher amount of synthetic fuel are controlled by temperature sensor (4), pressure sensor (5), control unit (6), thermoregulator (8) and high pressure water dosing pump (7). Heat transfer medium (HTM) holds catalyst required working temperature. Gasoline is a mixture of alkanes, cycloalkanes, and alkenes. Aim of the research is production of synthetic fuel with similar properties. Experimental equipment makes use of the best catalyst and thermophysical conditions. Synthetic fuel produced by the process is cheaper and better than petroleum-derived fuel. Carbon particles needed for the production of hydrogen and carbon monoxide are made from waste by pyrolysis. Large scale production can use solar concentric collectors slated for steam power plants.