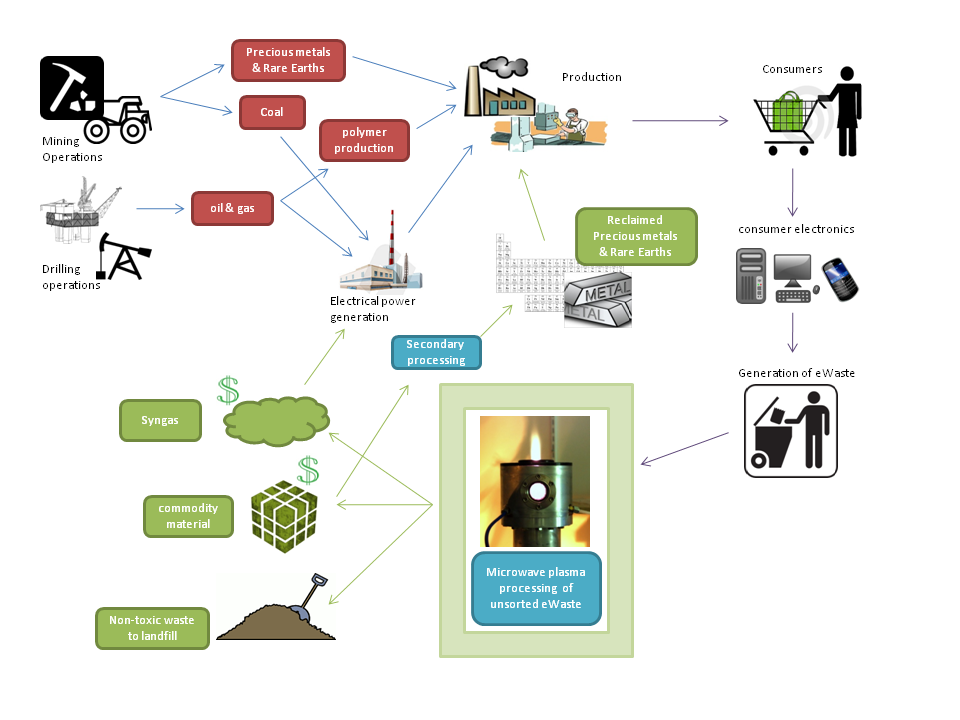 Since the mid-1990s, electronic waste has been recognized as the fastest-growing component of the solid-waste stream as small consumer electronic products such as cellular phones have become ubiquitous in developed and developing countries. In the United States alone, consumers annually throw away about 47 million computers and over 100 million cell phones, and these products are discarded without much concern for their adverse impacts on the environment and public health. Due to a lack of cost-effective recycling methods much of the electronic waste from the United States and other developed economies is regularly shipped to countries with less stringent environmental regulations where it is often processed in ways that lead to the toxification of the environment.

The concept presented here is to develop a microwave plasma processing concept that can be used to redirect the stream of electronic waste from a path that leads to toxification of the environment and loss of valuable resources in the form of precious metals and rare earth elements to a path that leads to an environmentally impact neutral and economically viable cycle of material reclamation and reuse.

One of the challenges of electronic-waste recycling is the fact that the composition of the e-waste is not easily sorted into commonly recycled materials. To that end it is suggested that an efficient microwave plasma based process can be used to perform the critical first stage recycling of e-waste by converting its polymeric component into gaseous products, primarily acetylene, ethylene and hydrogen, that have commercial value. The plasma discharge will also simultaneously dissociate the volatile organic compounds contained within the e-waste. The remaining material will comprise a reduced mass and volume that will be a mixture of metals, silica and soot. This remaining non-toxic material can then be separated through secondary processing steps to reclaim the copper and aluminum and, if deemed economically feasible, the precious metals and rare earth elements.

The primary component of this system will be a microwave plasma reactor. This unique reactor design is based upon an original concept developed by the proposer and exhibits a number of critical advantages over the high power dc arc reactor that is commonly used for industrial processing. The microwave plasma produced by the reactor does not directly contact any physical surface – rather it forms on the central axis of a cylindrical microwave cavity and is fluid-dynamically stabilized – and as such, is not subject to the high thermal losses associated with high power dc arcs. The electrodeless nature of the device also simplifies the design by mitigating maintenance requirements associated with the active cooling requirements and material erosion of the systems anode and cathode. The MET plasma is also extremely efficient – coupling in excess of 98% of the input microwave power into the discharge, and has be experimentally demonstrated to be scalable in power level from 100’s of Watts to greater than 30 kW and an increase to MW class reactors poses no foreseeable technical challenges.