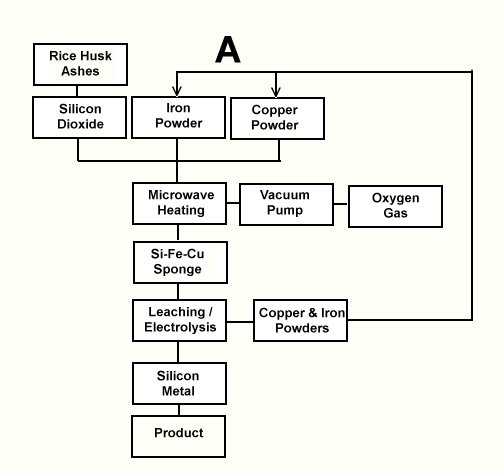 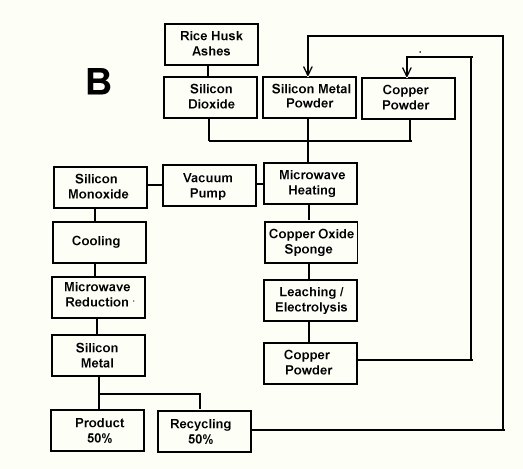 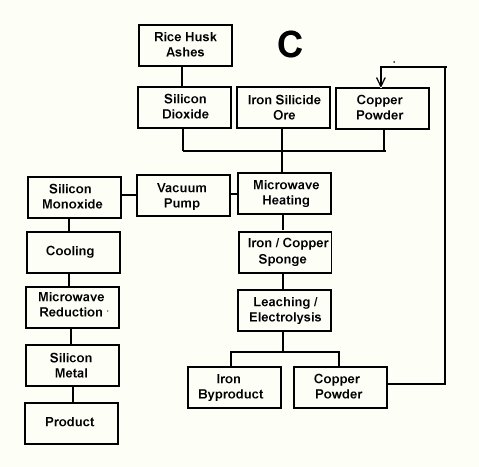 Silicon, being one of the most abundant elements in the universe, is also the best future energy material. Silicon metal, i.e., burns in Oxygen and Nitrogen generating big heat, decomposes water generating Hydrogen, can dehydrate Methanol to generate DME, a powerful gas that can replace LNG. Silicon is efficient in power cells and also as a compound has thermoelectric characteristics. On top of all that it is clean.

Current Silicon metal is costly to produce and generates high volumes of CO2. Its high cost comes from the high energy required in Carbon reduction of Silica.

Our research departed in the late 80’s with the fortunate finding of naturally occurring silicides in Peru. At that time Silicon chemistry and metallurgy was scant. Thanks to the electronic industry research great advance has been made in the last decade. Also the advances in non conventional heating i.e. Microwave and Solar allow us to indicate a new path for obtaining cheaper Silicon metal.

We show here three flow sheet drafts for obtaining it. Figure A shows the production of the metal from Rice husk ashes using Copper powder both as a heating element and a catalyst. Figure B shows the intermediate production of Silicon Monoxide gas for obtaining the metal instead of using the refractory Silicon dioxide for that purpose. Figure 3 shows the obtention of Silicon Monoxide from naturally occurring silicides.

The physics involved in the process take advantage of the powder nature of raw materials, the catalyst reaction of Copper Powder and the chemical versatility of the red metal. The action of Microwaves on powdery charge are not only heating but also some molecular tunneling reactions that ocurr at temperatures between 500 and 900 degrees Celsius, as well as complex redox reactions.

One possibility could also be to use concentrated Solar heat as the energy input to the processes.