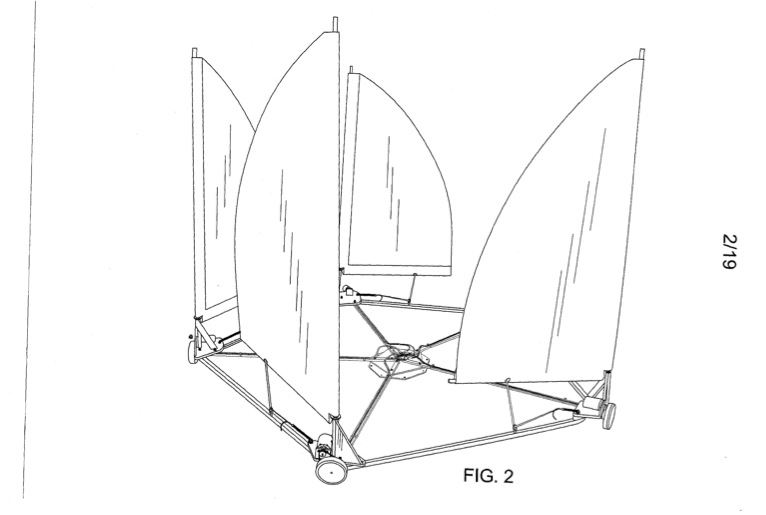 We have invented a unique configuration of wind turbines. The construct consists of vertical sails affixed to the periphery of a rotating framework. This framework has wheels at the location of the sails and a pivot point at the center. As the wind causes the sails to push the frame around the central pivot point, the wheels roll and drive electrical generators. The electrical energy generated is conducted to slip rings at the center pivot. This generated power travels through the slip rings and from there through power conditioning electronics and on to the grid or the end user.

The configuration is modular – many singular parts assembled into a construct. Most parts are “off-the-shelf.” Consequently, this design translates to dramatically-reduced costs of materials, manufacture, transport and erection. It ultimately creates a much better ROI (return on investment) to the user and is scalable through residential, urban and wind farm use.

The high lift-to-drag (L/D) ratio of the flex wing sails, controlled by non-linear springs, significantly contributes to the energy-production efficiency of the turbine. It also means more power harvested over the natural range of wind speeds. This effect of varying the sail camber in relation to wind speed means our turbine will start to produce measurable power at as little as 4 miles per hour wind speed. As wind speed increases to 7 or 8 mph, significant power is produced, and with a 12 mph wind, profitable power is being generated. This attention to efficiency at lower wind speeds means that our design is useful at the more common “real life” wind speeds rather than the artificially-high wind speeds at which wind turbines are currently rated.

The non-linear spring arrangement involves a safety release of sail angle-of-attack at extreme wind speeds. In other words, the sails are allowed to “luff” in very high winds, thereby protecting the machine from damage.

The flex wing sails will be manufactured from recycled plastic bottles. This HDPE material sheds water and is UV-resistant. The low cost is a benefit, as is the ecological benefit of reducing landfill loads.

Our turbines are better neighbors than the tower-mounted horizontal-axis wind turbines:
(a) Concept is low-profile, providing less intrusion into the field of vision of the skyline. An argument can be made that sails going in circles are more visually attractive than spinning blades mounted on towers.
(b) The noise footprint of the sail carousel is lower than the spinning blades of conventional turbines.
(c) The large, relatively slow-moving sails present a very low threat to birds and bats.

The distributed-load feature leads to a much-reduced need for infrastructure. In our smaller sized turbines (say up to 40-ft. diameter and 100 KW), erection can be achieved manually by a small labor crew. There is no need for cranes or other heavy machinery. There is no need for personnel to be more than a few feet above the ground when dealing with the Sail Carousel. Personnel safety is inherent with this design.