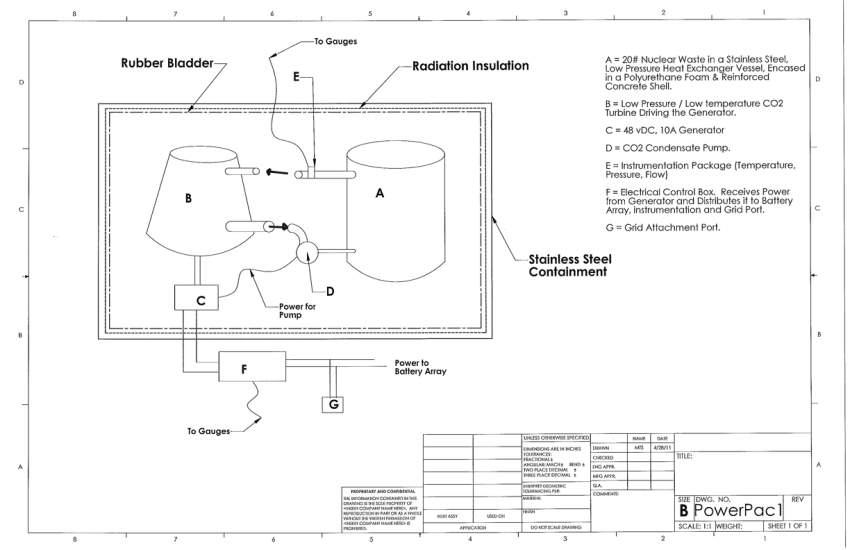 This device (see illustration) is a free-standing, completely self-contained, electrical power generating unit. It utilizes a ruggedized heat exchanger container for the nuclear waste, cooled by CO2 which drives a low-pressure, low-temperature turbine coupled to a generator. All of the above is permanently contained within a hermetically-sealed, radiation-shielded steel container. Once commissioned each PowerPack would run continuously providing DC voltage at about 10A for at least 10 years. At that time it would be exchanged vs. re-charged.

The initial concept could be used as the engine/generator replacement for existing hybred vehicles rendering them fully electric, continuously trickle charging the battery-pack under the control of the vehicle's electrical control management system. Such vehicles could be used in short range situations, e.g. taxi fleets, local delivery trucks and vans, commuter vehicles. Once accepted as safe and cost effective by the public, new vehicles would be designed and built with the PowerPack installed directly from the factory.

Such usage would reduce the ammount of nuclear waste that must be currently stored forever,reduce the requirement for petrolium used as fuel, reduce air polution from burning petrolium based fuels, and during non-use hours could be attached to the grid to provide excess power.

Although there is a real need for strict regulatory supervision, new manufacturing and employment opportunities are envisioned for the PowerPack itself, conversion stations for installation in existing vehicles, and electrical control systems for grid attachment.
The cost of the PowerPack unit for the user would be partially offset by the elimination of petrolium based fuels, lighter weight vehicles, no engine maintenance, and selling power back to the grid. Retrofitted vehicles could salvage the removed engine system. New vehicles would not have the expense of engine and fuel system components.