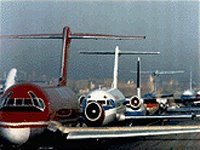 Wireless power systems, such as inductive power transfer (IPT), can be installed at airports to power aircraft while idling at gates and on taxiways. This would eliminate the need to run jet engines to power stationary aircraft, annually saving approximately 750 Mgallons of fuel and eliminating over 7 million mtons of carbon dioxide. Airport noise due to idling aircraft would also be significantly reduced. Such large-scale IPT systems are not being commercially produced for the airline industry.

Such a system is ideal for aircraft ground operations, since there are very specific aircraft parking locations at gates, taxiway paths, and holding locations where power "transmitters" can be installed in the tarmac. Since power transfer efficiency is inversely proportional to the gap between the IPT transmitter and receiver, a retractable skid for aircraft would be required for ground power.

Since this system would reduce the fuel required for aircraft prior to takeoff, the amount of fuel required to be carried onboard could be reduced, thus further improving fuel efficiency and reducing emissions. The noxious fumes that usually enter the cabin while departing from the gate would also be eliminated, thus improving public health while helping to mitigate climate change.